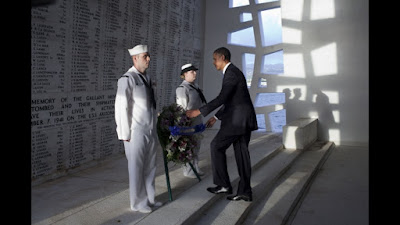 On December 29th, President and Mrs. Barak Obama quietly visited the USS Arizona Memorial at Pearl Harbor. Stuck in Washington trying to pass a  budget, he could not make it to Hawaii for the December 7th 70th Anniversary of Imperial Japan's surprise attack on Pearl Harbor. He made it his duty to be there soon after Christmas and before the New Year.

"Quietly" best characterizes how Obama promotes his historic work helping and memorializing the veterans of the Pacific. He has done more than any president before him. In 2010, he asked the Government of Japan to respect the sacrifices the American POWs of Japan made for peace in the Pacific. He succeeded in persuading Tokyo to formally and officially apologize to the American POWs and to establish a visitation program to Japan for former POWs and their families. He knows his work is not done and his Administration continues to press upon Japan for more.

He is the first president ever to advocate for the American POWs of Japan. He is also the first not to have his administration work actively to kill congressional legislation supporting the POW efforts for justice. The Bush II White House was so adamant about protecting their Japanese allies that they insisted on changes to a congressional resolution commemorating the 60th anniversary of the end of the Pacific War that both Republican and Democratic Senators found so offensive that they refused to consider the joint resolution. Thus, only the House passed the resolution and there was no "joint" congressional statement/resolution.

Back to Pearl Harbor, Obama's eloquent Presidential Proclamation on National Pearl Harbor Day (issued on the 6th so that it would make the morning papers in Japan on the 7th) contrasts to the astounding silence from both the Republican House of Representatives and presidential candidates.

For the first time in probably over 50 years the U.S. Congress did not issue its annual "concurrent" resolution honoring the dead of Pearl Harbor Day. We could not confirm when the first resolution commemorating Pearl Harbor Day was issued. It is generally assumed that it was during the Kennedy Administration as according to historian Emily Rosenberg, the author of The Date That Will Live: Pearl Harbor in American Memory, the anniversary was downplayed until then.

With only 59 hard-fought co-sponsors, H.CON.RES. 89, "Expressing the sense of the Congress regarding National Pearl Harbor Remembrance Day," languishes in the House of Representatives. It has not even been called up before a Committee. As a "concurrent" resolution it must first pass the House before it is considered by the Senate. On approval by both the House of Representatives and Senate, they are signed by the Clerk of the House and the Secretary of the Senate. They are not presented to the President for action.

It is unlikely that this bill will ever be voted upon. The House Republican leadership of the 112th Congress adopted new rules barring consideration of any measure that “expresses appreciation, commends, congratulates, celebrates, recognizes the accomplishments of, or celebrates the anniversary of, an entity, event, group, individual, institution, team or government program; or acknowledges or recognizes a period of time for such purposes” (Rule #28). There have been exceptions, most notably reaffirming "In God We Trust" as the U.S. moto and H.RES. 376, "Calling for the repatriation of POW/MIAs and abductees from the Korean War."

On December 19, House Speaker Boehner did allow another resolution to pass--his own. His H.Res. 497 honors Sir Winston Churchill, commemorates the 70th anniversary of his “The Masters of Our Fate” speech before Congress, and provides for the placement of a statue or bust of Sir Winston Churchill in the United States Capitol. Mr. Boehner's resolution not only honors and commemorates, he also asks for taxpayer money to be spent.

World War II and its veterans are passing. Neither H.Con.Res. 89 nor H.Res. 333 (for the American POWs of Japan) are likely to pass the House. There is no longer a constituency that will hold the House leadership responsible for ignoring WWII veterans or their vital history. The Speaker of the House, John Boehner (R-OH), who did not issue a Pearl Harbor Day statement, has the power to make exceptions to "Rule 28," but for now he has no incentive do so (unless you tell him why).

The only Republican presidential candidate to note Pearl Harbor day was Representative Michele Bachmann and that was only through a tweet: "Please remember the victims of the #PearlHarbor attacks. The "date of infamy" that forever changed America happened 70 years ago today." In the entire Congress, House and Senate (535  members), only 70 members issued statements.

More amazing, only 30 (43%) of these statements mentioned Japan. There is no recognition as to whom was responsible for sinking most of the U.S. Pacific Fleet or why. Only that this act somehow brought Americans together.


The exact breakdown is as follows:

We have collected all the statements and would be happy to share them with you. Simply email us and we will send you our research report.
at 6:48 PM No comments: