Since June 1, 1983 with the 98th U.S. Congress, there have been 22 House bills, 17 Senate bills, seven House resolutions, one Senate resolution, one Senate Judiciary Committee hearing (2000), and one House Judiciary Committee hearing (2002) to address compensation or other issues affecting former POWs in the Pacific.  Few of these congressional efforts to provide recognition or compensation to the American POWs of Japan have been successful.

The bills and resolutions have ranged in intention and scope, some requesting compensation, others authorizing legal standing to sue Japanese companies, two requesting the opening of wartime records, and others honoring the POWs for their quest for justice.  In the 110th Congress, legislation was introduced to award a gold medal in honor of the American soldiers on the Bataan Death March without any mention of Japan. Some bills were very broad to include all former POWs and slave laborers during World War II, others more specific to only include those American soldiers subjected to the Bataan Death March who became POWs.
Few of the bills and resolutions have been successful.
For the LEGISLATIVE HISTORY click this photo of the Foreign Minister of Japan in September 2010 delivering his country's apology to a delegation of American former POWs of Japan. H. Res. 333 thanks the government of Japan for their apology and honors the American POWs for their efforts toward justice and reconciliation. 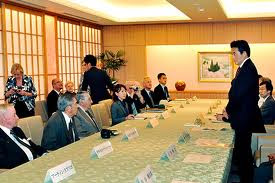