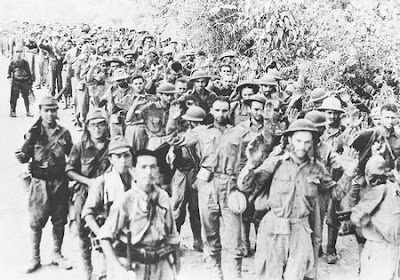 Today, is the 78th Anniversary of the fall of the Bataan Peninsula in the Philippines. Within hours of Japan's December 7, 1941 attack on Pearl Harbor in Hawaii, Japan's planes descended upon the Philippines knocking out the critical airfields and naval facilities. By mid-December, American soldiers, sailors, airmen, Marines, and whoever signed up, retreated to the Bataan Peninsula or to the fortress island of Corregidor in Manila Bay.

While Singapore, Hong Kong, and Batavia were occupied, the Asiatic Fleet was destroyed, and the Far East Air Force was annihilated, the Am-Fil forces on the Philippines fought on against the Japanese invaders. In February 1942, Japanese subs and aircraft bombed Darwin, Australia and Santa Barbara, California. By March, Am-Fil forces found their supplies and ammunition nearly gone. But they fought on.

After 99 days in battle, with no hope of reinforcement, out of food, medicine, and ammo, Major General Edward P. King Jr. surrendered his troops on Bataan—against General Douglas MacArthur’s orders and on the anniversary of the Gen Robert E Lee's surrender at Appomattox (1865). Thus, approximately 78,000 troops (66,000 Filipinos and 12,000 Americans), the largest contingent of U.S. soldiers ever to surrender, are taken captive by the Japanese.

The men and women on Corregidor and the other fortress island in Manila Bay fought on for another month. Those soldiers and sailors in the outlying provinces hung on a bit longer. By mid-May, all of the Philippines had been surrendered. Although, none of these men in arms were on the Death March, they suffered and died the same in the POW camps on the Philippines and in the hellships to Japan.

The prisoners surrendered on Bataan on April 9th were at once led 65 miles from Mariveles, on the southern end of the Bataan peninsula, up to San Fernando and then another 20 by miles by packed standing in steaming train cars and by foot to Camp O'Donnell on what became known as the “Bataan Death March.” Estimates vary, with 300-600 Americans and 2,000-5,000 Filipinos dying on the infamous March because of the extreme brutality of their captors, who starved, beat, and kicked them along the way; those who became too weak to walk were bayoneted, beheaded, or shot.

At Camp O'Donnell, the survivors had little water, food or medicine. There the death rate far exceeded the toll from the March. By June, nearly a third of the POWs had died.

After the war, the International Military Tribunal, established by MacArthur, tried Lieutenant General Homma Masaharu, commander of the Japanese invasion forces in the Philippines. He was held responsible for the death march, a war crime, and was executed by firing squad on April 3, 1946.

Efforts were made after the war, to retrieve as many bodies as possible left along this infamous trail. The ghosts of many remain.