A daughter's story of a father lost

The Friends of World War II Memorial, a private nonprofit, have an educational series of talks on WWII history.

On March 20th, one of the presentations was by the ADBC-MS's former VP Nancy Kragh.
Nancy was instrumental in having a memorial stone to the men of the Enoura Maru placed at the
National Memorial Cemetery of the Pacific (the Punchbowl) in Hawaii.
at 4:54 PM No comments:

POWs of Japan Appeal to Congress

On March 18th, the American Defenders of Bataan and Corregidor Memorial Society submitted its annual testimony for the record to the joint hearing of the House and Senate Veterans' Committees to hear from Veteran Service Organizations.You can find all the hearing documents HERE. You can watch the hearing HERE.

Jan Thompson, president of the ADBC-MS told the Committee members:

The final and fourth battle for the American POWs of Japan is for them not to be forgotten. Current and future generations can be inspired by their “victory from within.” There are still lessons to be learned. Most important, Congressional advocacy for the POW’s legacy reassures today’s fighting men and women that their service and sacrifice will be remembered.

To ensure that the POWs’ unique history is appreciated and retained, I ask Congress to:

2. Instruct the U.S. Department of State to prepare a report for Congress on the history and funding of the “Japan/POW Friendship Program” that began in 2010 and how it compares with programs for (i) other Allied POWs and (ii) the Kakehashi people exchange program in the United States.

3. Encourage the Government of Japan to continue the “Japan/POW Friendship Program.”

4. Encourage the Government of Japan to expand its “Japan/POW Friendship Program” into a permanent educational initiative.

5. Request the Government of Japan to honor its 2015 promise to include the “full history” of Japan’s UNESCO World Industrial Heritage properties of the Meiji Industrial Revolution: Iron and Steel, Shipbuilding and Coal Mining. The history of POW slave labor at many of these sites is not included at either the locations or the new Tokyo Information Center.

6. Encourage the Government of Japan to create a memorial for the Allied POWs of WWII at the Port of Moji on Kyushu where most of the POW hellships docked and unloaded their sick and dying human cargo.
See HERE for the complete text of the testimony.
at 9:29 AM No comments:

ON Saturday, March 20, 2021 the Friends of the National World War II Memorial will hold a seminar on World War II that will feature an ADBC-MS member talking about her search for her father. REGISTER HERE.

Patriots from the Barrio
With Dave Gutierrez, author and historian. In 2019 he was named President of Nuevo Mundo Historical and Genealogical Society of Silicon Valley. Patriots from the Barrio (2019) is the true story of Company E, 141st US Infantry: the only all Mexican American US Army unit in WWII and one with deep connections with his own family. The film rights to the book have been obtained in Hollywood.
PURCHASE BOOK: https://amzn.to/3s3IZ9X

Discovering My Father
With Nancy Kragh, former vice president of the American Defenders of Bataan and Corregidor Memorial Society. She was instrumental in having a memorial stone to the POWs of the ill-fated hellship Enoura Maru. ‍Her presentation centers on her father's experiences as a POW of Imperial Japan during WWII and her odyssey to connect with a father she did not know who died on the Enoura Maru. She is a member of the American World War II Orphans Network (AWON), which unites the 183,000 Americans who lost a parent to World War II.
PURCHASE BOOK: (not by Ms. Kragh, Father Found by Duane Heisinger) https://amzn.to/3s1exNz

The Kitchen Front: Cooking with Rations in Second World War Britain
With Jennifer Ryan, author of The Chilbury Ladies' Choir, The Spies of Shilling Lane, and The Kitchen Front. Originally from Britain, where she was a book editor with The Economist, DK, and the BBC, she now lives in Northern Virginia with her husband and two children. The Kitchen Front (2021), a novel, was inspired by her grandmother's tales of the war.
PURCHASE BOOK: https://amzn.to/3qYTXfB
at 8:42 PM No comments:

Historian of the POWs of Japan 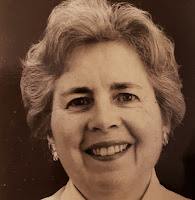 Linda Goetz Holmes of Shelter Island, a journalist who devoted decades of her life to bringing to light the treatment of Allied POWs imprisoned by Imperial during World War II, died August 18, 2020. She was 87.

Holmes was a member of the Overseas Press Club Foundation and past president and board member of the Society of the Silurians, the nation’s oldest press club. She was also an associate member of the Association of Former Intelligence Officers.

She wrote three influential books about POW experiences, 4000 Bowls of Rice: A Prisoner of War Comes Home, Unjust Enrichment: American POWs Under the Rising Sun (of which there are two editions , 2000 and 2008, with the second having a new forward), and Guests of the Emperor: The Secret of Japan’s Mukden POW Camp. She also completed and published POW archivist Roger Mansell's book on the men and women captured on Guam by the Japanese in December 1941,  Captured: The Forgotten Men of Guam. 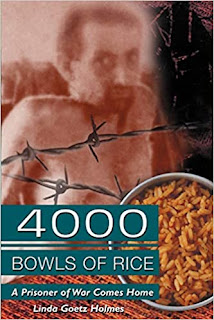 Born into a news family
Linda Graves Goetz was born May 4, 1933, in White Plains, NY. She was the second child of Florence (née Brown) and Theodore Becker Goetz, a prominent newspaperman in Westchester County.

Along with her older sister, Susan, she attended Scarsdale schools. According to the Scarsdale Alumni Association, Holmes was “the wittiest in her class”. The caption under her senior photo was “Lady of the Press”.

After graduating from Wellesley College in 1955, Holmes jumped into the world of broadcast. She worked in the television production department at Ted Bates & Co., a pioneering advertising agency in Manhattan, and at CBS Television.

In 1959, she married Theodore Edward Holmes. The couple had two sons and later divorced.

POW research
In 1994, Holmes published her first book, 4000 Bowls of Rice, about Allied prisoners of the Japanese who built the Burma Railway. The book was inspired by a conversation over dinner on Shelter Island with an Australian friend, who’d spent three and a half years in POW camps in Java, Burma, and Thailand.

Holmes relates how Cecil Dickson, who served with the Australian Pioneer Battalion, off-handedly marveled while passing a serving dish of rice, that even though he’d eaten nothing but rice for over 3,800 consecutive meals, he still enjoyed it.

Dickson, also a journalist, was the first POW Holmes met who had actually worked on the Death Railway made famous in the film The Bridge on the River Kwai. After he passed away, his widow sent to Holmes a packet of letters that he’d written during his time as a POW. Holmes conducted research and connected Dickson’s stories of forced labor to records kept about Allied prisoners who built the notorious Thai-Burma Death railway.

In 4000 Bowls of Rice: A Prisoner of War Comes Home, which includes photographs taken in secret by POWs and not previously published, Holmes tells a story of slave labor that had not before been reported. She said she was inspired by the spirit of the prisoners, “the indomitable determination to look ahead because if you dwell on the past you are still a captive in your own mind.”

The book was added to the John E. Taylor collection of military history and intelligence volumes at the National Archives Library in College Park, Maryland, the National POW Museum at Andersonville GA, and the Australian War Memorial.
In 2011, Linda was the American Defender of Bataan and Corregidor Memorial Society's first Roger Mansell Guest Lecturer. She spoke in Pittsburg at the Society's 2nd annual convention about her work on Roger Mansell's book about the Guam POWs.

Locating and declassifying records of World War II war crimes
Richard Myers, a senior archivist for the National Archives Modern Military Records, was among the people Holmes got to know well during her research. It was at his recommendation that she became the first Pacific War historian appointed to the U.S. Government Interagency Working Group (IWG). It was formed in 1999 under the aegis of the National Archives to locate and declassify material about World War II war crimes. The agency made a final report to Congress in 2007.

In her work with the IWG, Holmes interviewed more than 400 ex-prisoners of war, their families, American and Japanese military personnel and historians, government and banking officials, and archivists from around the globe to authenticate what happened to prisoners in Japanese hands and why.

She presented her findings before audiences at the National Security Agency Center for Cryptologic History, the National Museum of the Pacific War (Admiral Nimitz Museum), and numerous civic groups, veterans organizations, and classrooms throughout the country. You can watch an interview with Holmes recorded for the Robert H. Jackson center on YouTube.

In that book, you can see photos of her beloved colonial-era home on Dinah Rock Road, a circa 1775 house that she had transported by barge from Cutchogue. Holmes bought the house in 1968 and a year later hired the Davis Brothers to transport it across the bay to a lot she’d purchased for $7,000.
Services

Holmes was predeceased by her parents and sister. She is survived by her sons, Philip and Theodore. The Shelter Island Funeral Home assisted the family, who received friends on Tuesday, August 25 at the Parish Hall at St. Mary’s Episcopal Church. Funeral services were held the following morning officiated by the Rev. Charles McCarron. Interment followed at St. Mary’s Cemetery.
requiescat in pace
Editor’s note: This article was adapted from one that first appeared in the Shelter Island Reporter. Their intern Maeve Browne contributed to researching and writing this report. They owe special thanks to Patrick Clifford of the Hay Beach Property Owners Association for bringing this remarkable woman’s story to our attention. Thanks also to Katherine Moore at the Shelter Island Public Library for quickly locating Linda Holmes’ books for us to read.