SAN FRANCISCO, Calif. (KTXL) May 12, 2021 — The history between the Philippines and the United States is deeply rooted in World War II.

It was 1942. World War II had marched into its third year.

The Philippines, like Hawaii, at the time, was a coveted assignment for many American servicemen until the Imperial Japanese Army and Navy invaded.

Dr. Mickey McGee, the director of the Doctor of Business Administration program at Golden Gate University, told FOX40 his mother was with those forces serving as a guerrilla soldier.

“They were very loyal and courageous allies of the U.S. Army,” McGee said. “The Filipinos, fighting alongside their American comrades, were able to last as long as they could.”

When the Japanese reached the Bataan Peninsula, the Americans and Filipinos held out as long as they could.

“The Filipino and American forces in Bataan were able to disrupt the 50-day time table of the Imperial Japanese army and they held on for 99 days,” said Cecilia Gaerlan, executive director of the Bataan Legacy Historical Society.

“They were instrumental in basically slowing down their attack,” McGee said.

But ultimately, they couldn’t stop the Imperial Japanese Army. The Siege of Bataan would become one of the most devastating military defeats in American history where 76,000 Filipino and American troops were forced to surrender.

They would make what would become known as the Bataan Death March, a 65-mile walk to prison camps with little-to-no food or water.

“I’ve heard stories of my mom was one of those people on the Bataan Death march,” McGee said. “And many of them got killed while they were trying to help.”

Gaerlan’s father, a lieutenant in the 41st infantry regiment, was a survivor of the death march.

Growing up, she says he’d share bits and pieces about his ordeal in a comedic way.

“He was like a one-man comic with sound effects,” Gaerlan recounted.

One particular story stands out, about what happened before the march, when the Japanese confiscated valuables such as watches and rings from the Filipinos and Americans.

“He had this toothbrush in his pocket. And it looked like a fountain pen. So, he didn’t want to give it away. And the Japanese guard grabbed it. And then, when he saw it was a toothbrush, my father had a grin and then the Japanese got mad at him, and hit him with the butt of a rifle. But the way he told it with his antics,” Gaerlan said.

“Some of the soldiers were writing their farewell letters. And some committed suicide because they couldn’t take it anymore,” Gaerlan said. “When I asked my father, ‘Did this happen?’ He broke down.”

Gaerlan’s father was one of the lucky ones which is why she founded the Bataan Legacy Historical Society.

The goal of the non-profit based in the Bay Area is to share the history of the Filipinos during the war so generations to come will know their sacrifice and bravery.

During her research, she read about an analysis of her dad’s regiment in the army and was moved beyond words

“When I was reading this document, I was crying because I didn’t know what really had happened to him in Bataan. And then when I asked him, well, he broke down. And that’s when I really found out what happened to him,” Gaerlan recalled.

The pain he and so many soldiers experienced in Bataan is what drives Gaerlan and McGee to make sure their parent’s service is never forgotten.

Gaerlan is working to get a Navy warship named for Telesforo Trinidad, the first Filipino sailor to receive the Medal of Honor in 1915.
at 2:22 PM No comments: 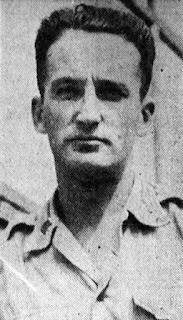 The airfield had only been wrested from the Japanese in early March during the Admiralty Islands Campaign (Operation Brewer) by the US Army's 1st Cavalry Division.

Momote's 4,000-foot-long runway had been badly damaged by bombing, but it was revitalized by the Seabees of Mobile Construction Battalion 40, who began work on it only a few days after the February 29, 1944 landing. It is worthy of note that they did so while the area was still an active battlefield, a daring feat for which they received the Presidential Unit Citation. Here it is worth noting that the many airfields they and other units built across the Pacific are now abandoned. A little knowledge of the US campaigns during the Pacific War would provide many suggestions on locations and the challenges to rebuild US forces in the Pacific.

The plane was piloted by Rochester, New York native 1st Lt. Harold R. Prince. The crew included gunner TSgt Ashford H. Cardwell and engineer TSgt Anthony Zulkus. They were headed 500 miles across the Bismarck Sea to the then-Headquarters of the Fifth Air Force (15 June – 10 August 1944) at the Nadzab Airfield Complex on New Guinea. The weather was reported as good on the flight route. Before reaching New Guinea's northeast coast, possibly three-quarters toward Nadzab, the plane ran into engine trouble and the pilot attempted a crash landing on the water.

It was a hard landing. Prince, Cardwell, and Finnegan never surfaced. They went down with the plane. Zulkus miraculously survived the crash and was soon rescued. Although interviewed decades later by the founder of the acclaimed Pacific Wrecks website about the crash, his memory was understandably hazy. Prior to the flight, he did not know Lt. Finnegan. [If interested I can put you in contact with this researcher]

When the aircraft failed to arrive it was officially listed as Missing In Action (MIA).

MIA Lt. Finnegan was one of President Joe Biden's mother's brothers. The President is his uncle Lt. Finnegan's Primary Next Of Kin (PNOK).

President Biden is also possibly the second president with a MIA family member. Joseph Kennedy, Jr., the older brother of President John F. Kennedy, died in a plane explosion over the English Channel near the North Sea on August 12, 1944 and is listed on the Tablets of the Missing at Cambridge American Cemetery and Memorial near Cambridge, England. However, the formal military definition of MIA is someone with whom contact is lost and whose whereabouts are not known, but whose death is not confirmed. Kennedy's death was confirmed, Finnegan's was not.

So, take a moment on May 14th to remember Lt. Finnegan, another hero of the Pacific War.

Lt Finnegan is remembered at the family grave [you can leave a flower or note at this website] and is on the Tablets of the Missing in the American Cemetery in Manila.

Island Hopping toward Japan 1943-44, US Army Center of Military History
at 9:07 AM No comments: