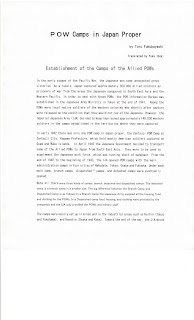 This December 2004 research paper, by Mr. Toru Fukubayashi, a high school teacher and co-founder of Japan’s POW Research Network, provides a history of the: Establishment of the Camps for the Allied POWs; Daily Life of the POWs; Liberation of the POWs and the War Crimes Trial; and a List of the POW Camps in Japan (but not in Japan's colonies or occupied territories).
The POW Research Network Japan was established March 2002 with about 40 members all over Japan. It researches and studies the Allied POWs, civilian internees, war criminal trials, and related issues. In addition, the Network holds exchanges with the ex-POWs and their families.

In 1980, the American Ex-Prisoners of War association issued a map of the known POW camps throughout the Japanese Empire. Current research has expanded the number of camps and better organized the naming of the camps, however, this MAP does show the extent of camp system. There does not yet seem to be a new map of Japan POW prison camps.