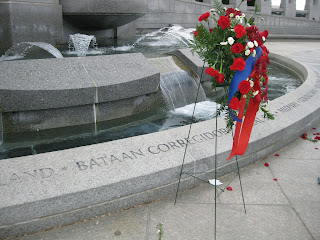 It is with great sadness that I report that Sgt Lester Tenney née Tennenberg of the Maywood, Illinois 192nd Tank Battalion Company B died on Friday morning, February 24th in Carlsbad, California.

Dr. Tenney survived the tank battles on Bataan in the Philippines when Japan invaded in December 1941, the April 9, 1942 surrender and the tortures of the infamous Bataan Death March, the squalid POW death camps on the Philippines, Camp O’Donnell and Camp Cabanatuan, the Hell ship Clyde Maru to Japan, and Mitsui’s Omuta Miike coalmine (now a UNESCO Industrial World Heritage site without mention of POW slave labor) to receive a AM from San Diego State University in Business Education in 1967 and a PhD in Business Administration from the University of Southern California in 1972. He became a professor of accounting and finance at Arizona State University.


Most important, he was an effective advocate for the American POWs of Japan. In 2009, as the last National Commander of the American Defenders of Bataan and Corregidor, he persuaded the Japanese government to offer an official, Cabinet approved apology to their wartime POWs and to establish in 2010 a reconciliation trip to Japan for American former POWs and their families.

In 2013, the Embassy of Japan awarded him an Ambassador’s commendation and medal for his “distinguished service in contributing to the deepening of mutual understanding and friendship between Japan and the United States of America.” In April 2015, he was again honored by being invited to attend Japanese Prime Minister Shinzo Abe’s address to a joint meeting of Congress as well as join the Prime Minister’s gala dinner that evening. Later that year, he represented the American Defenders of Bataan and Corregidor Memorial Society at President Barack Obama’s Veterans Day breakfast. Since 2015, he has written a series of remembrances for the Wall Street Journal on his POW experience.


In July 2015, he participated in a ceremony at the Museum of Tolerance  in Los Angles to receive an official apology from Mitsubishi Materials Corporation to all its former POW slave laborers who were assigned to four of their copper and coal mines. The Mitsubishi Company, however, did not join in this apology. Nor have any other Japanese companies that used American and Allied POW slave labor.

Dr. Tenney witnessed much progress by Japan in its taking responsibility for Imperial Japan’s war crimes. And he persisted in his quest despite the many obstacles created by his own government. His disappointment was never receiving an apology from Mitsui, the company that enslaved him. He not only dug coal in a dangerous, obsolete mine, he also participated in plays that cheered his fellow prisoners and entertained the mine's owner, Baron Mitsui who enjoyed watching the spectacle.

Dr. Tenney was 96 and is survived by his wife, Betty (their 57th anniversary would have been Tuesday, February 28th); a son, Glenn Tenney (Susan) of San Mateo; two stepsons, Don Levi (Eileen) of Doylestown, PA, and Ed Levi (Jan) of Mountain View, AK; seven grandchildren; and two great-grandchildren.

HERE is an obit that appeared Saturday’s in the San Diego Union Tribune and HERE is the one in The New Times. However, both contain a number of inaccuracies.

Please do not hesitate to contact me if you would like information on sending a condolence card to his widow, Betty.

Please donate to the American Defenders of Bataan and Corregidor Memorial Society in his memory.
at 4:26 PM No comments: