In 1944, after hours of Naval bombardment, American Marines and Infantry soldiers stormed the beaches. Marine Major General Roy S. Geiger, commanding general of III Amphibious Corps urged them forward saying "You have been honored. The eyes of the nation watch you as you go into battle to liberate this former American bastion from the enemy. The honor which has been bestowed on you is a signal one. May the glorious traditions of the Marine Corps' esprit de corps spur you to victory. You have been honored."

The Battle for Guam, lasting 21 days, was as nasty and brutal as any had been in the Pacific. The Imperial Japanese forces put up a tenacious resistance exacting heavy casualties. Japanese stragglers fought for months after the defeat and the last one was not found until 1972.

Soon, from airfields on Guam, as well as those on Tinian, B-29s were bombing the Japanese home islands. Hard fighting was yet to be experienced by Marine divisions on Peleliu, Iwo Jima, and Okinawa. But whether they knew it or not, the end of the war was less than a year away.

The War in the Pacific National Historical Park is a memorial to the citizens and liberators of Guam. It was established in 1978 to commemorate the bravery and sacrifice of those participating in the campaigns of the Pacific Theater of World War II and to conserve and interpret outstanding natural, scenic, and historic values and objects of the island of Guam. The National Park Service's website on Guam is an excellent historical resource including first person accounts and photos.

Part of Japan's terrible cost on Guam were 10,971 battlefield casualties, and more than 8,500 Japanese were killed or captured on Guam between August 1944 and the end of war in August 1945. In the 21 days of the Guam campaign ending 10 August, American Marine units of the III Amphibious Corps reported 1,190 men killed in action, 377 dead of wounds, and 5,308 wounded. The 77th Division's casualties were 177 soldiers killed and 662 wounded.

According to Captured: The Forgotten Men of Guam, an account of the POWs from Guam, there were 414 civilian and military, men and women POWs (five Navy nurses and a civilian wife and infant). Somehow, despite desperate conditions and dismal leadership only three percent perished. They were all taken to Japan aboard the Argentina Maru in January 1942 and first held at the Zentsuji POW Camp on Shikoku. There they did agricultural and stevedore labor. Some reportedly were used for human experimentation.

Today, of the more than 22,000 people who lived in Guam through World War II, less than 1,000 are still alive to share their memories. One constant, is the respect the people of Guam hold for their liberators, the US Marine Corps. The above video is from this past weekend's memorial ceremony.
at 11:28 PM No comments:

Jungle Journal: Prisoners of the Japanese in Java 1942-1945 is a true account of the alternate horror and banality of daily life, and the humor that helped British POWs of Japan on Java survive the beatings, deprivation, and death of comrades.

Told through the diary and papers of Lt Ronald Williams, an officer in the 77th Heavy Anti Aircraft Royal Artillery and others, Jungle Journal includes many cartoons and poems produced by the prisoners, as well as extracts from the original Jungle Journal, a newspaper created in the first months of captivity by the men under the noses of their guards.

Williams was the "editor" of this potentially fatal "publication" produced at the Tanjong Priok POW Camp just north of Batavia (Jakarta). Over 6,000 POWs of all nationalities were kept there. Americans were survivors from the USS Houston and the Texas Lost Battalion.

At the end of the war Williams kept as many of the newspapers as he could and stored the collection in a trunk in the attic of his home in Powys, Mid Wales.

The first issue carried the message:


If this production can make one gunner forget for five minutes the disappointments and discomforts of his present position, then our editorial efforts will not be in vain.

The book was compiled and edited by Williams' son, Frank, and published in June. In an interview with The Daily Mail, Frank Williams observed "You can see hatred all the way through. They detested their captors but the men kept a level of humanity which I think is incredible really."

The Imperial War Museum has a good collection of artifacts, diaries, and oral histories from Commonwealth POWs held on Java. The BBC's "People's War" features a number of oral histories from POWs on Java. See Tommy Scott who was in the same regiment as Lt. Williams.
at 11:06 PM No comments:

May 27th, which happens to be Memorial Day in both United States and Japan this year (2013), was the 69th anniversary (1944) of the downing of Army Air Corps 2nd Lt. Robert E. Thorpe's P-47D Thunderbolt by Japanese ground fire near Kairiru Island, New Guinea.

Lt. Thorpe, 20, after ditching his damaged plane, swam ashore to Kairiru. There, he had the misfortune to become a POW to some of Imperial Japan's more sadistic Naval officers. 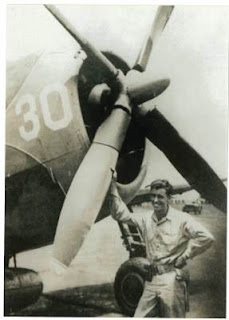 According to a Yokohama War Crimes Trial summary record (Case 329), Thorpe was first beaten and interrogated by Lt. Commander Kaoru Okuma and and Lt. Isamu Amenomoro. When Thorpe continued to refuse to supply any information other than name, rank and serial number, Okuma invited a group of soldiers to join in on the beating.


Whether Thorpe cooperated or not, the Commander of the 27th Japanese Special Naval Base Force Rear Admiral Shiro Sato had already ordered his execution. He explained to his Chief of Staff that on the Mainland all captured American flyers were executed and that "under the present circumstances...the execution of the prisoner of war cannot be helped."

Lt. Yutaka Odazawa, who had been selected to execute the prisoner, warned his fellow officers who wished to use Thorpe as target practice to shoot the prisoner below the waist otherwise it would difficult to behead him. After a number of gunshot wounds, Thorpe dropped to his knees and was held in this position at the edge of freshly dug grave. The trial records note:


Odazawa said to the flyer, "I am going to behead you under orders";  "I am golng to kill you"; "I Odazawa will now proceed to execute you"; "You wilI first go to Paradise, and I will follow you later on"; "Due to the war, it cannot be helped; I will dispose of you." He then poured water on the prisoners neck and on his samurai sword. With one blow of the sword, he struck the prisoner in the back of the neck. The head was not completely severed, but was hanglng by a small bit of flesh. After the blow the prisoner fell into the grave.

In the trial testimony, it was said that a Medical Petty Officer Waichi Ogawa climbed into the grave and cut out an organ from the deceased flyer. It does not say what was removed, but it is likely to have been the liver. As documented in James Bradley's, Flyboys: A True Story of Courage (2003), it was not unusual for Japanese commanding officers to consume the liver of their enemies.

Rear Admiral Shiro Sato killed himself and his entire family at his Yokosuka home in 1946. Petty Officer Waichi Ogawa was Sugamo Prison's first suicide (August 1947) during the Yokohama Class B and C War Crimes Trials. Lt. Commander Kaoru Okuma, was convicted in 1948 for his war crimes and hanged in 1949. Oddly, according to court records, his own father concurred with the death sentence.

Remembered in Rhode Island
On May 14th, Rhode Island State Representative Peter F. Martin (D-Dist. 75, Newport) introduced a Resolution on the House floor – unanimously supported by the Chamber – honoring Rhode Island native Lt. Robert E. Thorpe. “Lt. Thorpe is a hero in every sense of the word,” said Representative Martin. “He probably could have escaped some of the brutality inflicted upon him if he had been willing to cooperate with his captors. Instead, he went to his death bravely and defiantly.”

State House Resolution H 6114 (2013) "requests the Governor to honor 2nd Lt. Robert E. Thorpe posthumously with the Rhode Island star and the Rhode Island cross for his extraordinary heroism in the service of our nation during WWII; and be it further RESOLVED, That this House hereby urges the Graves Record Administration to re-investigate and bring the remains of 2nd Lt. Robert E. Thorpe home."

2nd Lt. Robert E. Thorpe's unmarked grave was never found and a memorial had never been held. Yet, his family and dedicated others have in the past decade stepped up efforts to locate him. During August 2009, the Joint POW/MIA Accounting Command (JPAC) did excavate a grave site thought to be Thorpe's, but found nothing.


Video of the Ceremony

Unforgotten
A book in the works, Broken Trust by Ken Dooley [to be published August 2015 as Relentless Pursuit], documents Thorpe's life, death, and the quest to bring him home. One journalist who previewed the book said it suggests the question "Were a good many guilty people in Germany and Japan spared the justice they deserved?" He compares the draft with the bestseller Unbroken and observes that they demonstrate "how that spirit of reconciliation has been disturbed in the last decade, as several writers have gone back and combed official records and trial transcripts that paint a Japanese culture far removed from serene gardens, arranged flowers and delicate poetry pondered in the moonlight."


These memorials, resolutions, books, articles, and videos show that Imperial Japan's victims are not forgotten. A new generation still searches for closure. The Japanese are wrong to believe we will forget.
at 2:24 PM 1 comment: