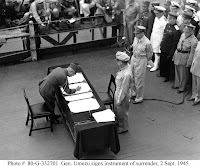 September 2nd is 66th anniversary of the signing of Japan's surrender document aboard the USS Missouri. Dr. Lester Tenney remembered the day in the Asian Wall Street Journal as the official end of his slavery for Mitusi & Co.

He wrote of the abuse he received as a POW from Mitsui's employees and about his enduring wish to receive a proper apology from the Mitsui company. Mitsui is one of Japan's largest and oldest conglomerates. It has an extensive presence in the U.S. and is hoping to benefit from contracts to build high-speed rail in California and Texas.


My slavery in Japan officially ended on Sept. 2, 1945, when Japanese and American representatives signed the formal surrender documents for the Pacific War. For nearly three years I was an American prisoner of war slave laborer for Mitsui Mining. I had survived the Bataan Death March on the Philippines and a "hell ship" to Japan only to be sold by Japan's military to the Mitsui conglomerate. Since liberation I have struggled to regain the dignity that both Imperial Japan and Mitsui stripped from me.
..........................
I strongly disagree with those that believe reminding Japan of its war crimes is counterproductive. The idea that the process of politely requesting an apology for atrocities creates too much political inconvenience is insulting to all involved. The trust needed to move our alliance forward can only be built upon a frank assessment of the past. Real friendship is forged through the acknowledgment of painful truths.

The Japanese government had been responsible for the supply and control of the POWs, but Japan's companies maintained the POW facilities and assigned our work. Now my fellow POWs and I wait for corporate Japan's apologies. Over 60 Japanese companies, nearly all still in existence—such as Mitsui, Sumitomo, Mitsubishi, Kawasaki and Hitachi—used POW slave labor to maintain war production. My letters to Mitsui and to Japan's chief business organization, Keidanren, have gone unanswered.

At the heart of all this effort is a simple truth: the need to remember, recognize and honor those who endured so much. I hope that both Japanese and Americans will support H.Res. 333 which thanks the Japanese government for its historic apology. This resolution encourages Japanese companies to follow this good example by apologizing and honoring the memory of the POWs who labored and suffered as slaves for profit.

This unresolved past casts a despicable shadow over the reputations of these companies today. It will continue to do so unless reason, fairness and human dignity prevail.

Dr. Tenney was a member of Maywood, Illinois' 192nd Tank Battalion, Company B that defended the Philippines in World War II. He lives in San Diego, California.