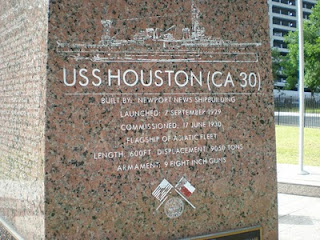 Many sons of Texas became POWs of Japan. Over 2,000 were on the infamous Bataan Death March. The Lost Battalion captured on Java on March 8, 1942 was an activated Texas National Guard unit. March 1st was the 70th anniversary of the sinking of the USS Houston that inspired the Nation to enlist and contribute to the war effort.

Five hundred and thirty two soldiers of the Lost Battalion, along with 371 survivors of the USS Houston were taken prisoner. Six hundred and sixty eight were sent to Burma and Thailand and 235 to other locations. They slaved on the "Burma-Siam Death Railway" building a railroad through the jungle and in the coal mines, docks and ship yards in Japan and other southeast Asian countries. They spent 42 months in captivity suffering humiliation; torture, both mental and physical; starvation and disease (without medication). Altogether, 163 soldiers and sailors died in captivity and of those 133 died working on the Thai-Burma Death Railroad. Many more died soon after the war as a result of diseases contracted while in captivity and the lack of recognition of their severe PTSD.*


On Saturday, March 3rd, two survivors of the World War II sinking of the USS Houston CA-30 the flagship of the Asiatic Fleet gathered in Houston, Texas along with relatives of their shipmates for a memorial service at a monument dedicated to their famous warship in downtown Houston's Sam Houston Park. None of Houston's five members of congress attended the event.

Seventy years ago on March 1, a Japanese fleet sunk, after a brief but heroic battle, the USS Houston and the Australian light cruiser HMAS Perth shortly after midnight, during the Battle of Sunda Strait off the coast of Java. The ship carried 1,068 crewmen, but only 291 sailors and Marines survived both the attack and being prisoners of war. With the sinking of the USS Houston, so ended the Asiatic Fleet.

Fifteen of the original crew members are still alive, but Howard Brooks of New Jersey and David Flynn of Florida, both 92, are the only ones able to attend the reunion of the USS Houston CA-30 Survivors Association. Brooks was among those forced to build the Thai-Burma Railway, made famous in the 1957 film "The Bridge on the River Kwai." 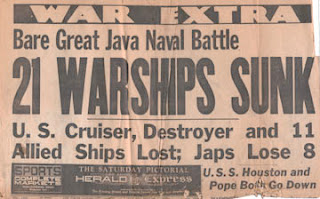 In Houston, the destruction of the warship resulted in a mass recruiting drive for volunteers to replace the lost crew, as well as an $85 million fundraising campaign to pay for a new cruiser and an aircraft carrier, the USS San Jacinto. According to a 1949 Houston Chronicle article commemorating the event, word of the USS Houston's fate "aroused a fever pitch of patriotism in Houston." "Her loss made the war something more of a personal conflict to more than half a million people," the article reads. "Official news of her destruction ... slapped the city squarely between the eyes, and set off a series of events that stands unequaled in the nation."

Today, the University of Houston houses an archival collection of documents and artifacts from the USS Houston CA-30. And there is an active Next Generation group maintaining two websites working hard to keep the memory alive.

Lloyd V. Willey, a Marine aboard the USS Houston and survivor of the Thai-Burma Death Railway became the survivors' Poet Laureate. He wrote: HOUSTON, Earned the name of `The Galloping Ghost', A fleeting shadow on the Java Coast Duty and Honor to Country, the code they knew, Well Done', to our `HOUSTON' and her crew.

*Numbers of survivors and deaths differ among researchers. The archivist of the Cruiser Houston Collection at the University of Houston says, "368 survived the sinking of the ship and the hours-long swim to the shore of Java....Nearly 13,000 Allied POWs and 100,000 Asian natives died building the Death Railway, including 79 men from the Houston."
at 6:37 PM