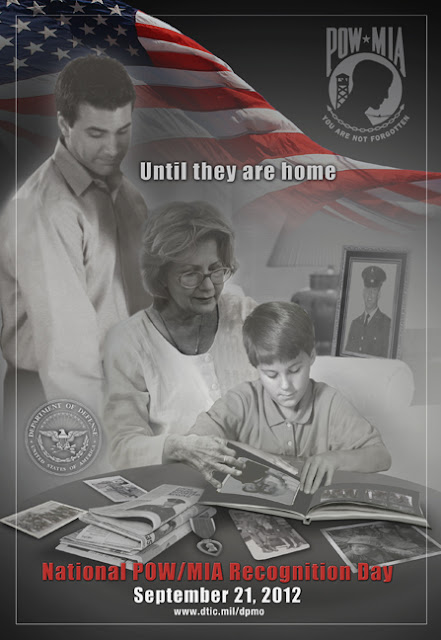 For more than two centuries, Americans have bravely served our Nation as members of our Armed Forces. Many have made profound sacrifices to uphold the ideals we cherish, carrying wounds that may never fully heal and dark memories that will never fade. Today, we pay solemn tribute to service members who bore war's tragic costs as prisoners of war and those missing in action. We stand with the families who have known the lingering ache of a loved one's uncertain fate. And as a Nation, we reaffirm a most sacred obligation: that we must never forget the men and women who did not come home, and that we must never stop trying to return them to their families and the country they fought to protect.

As long as members of our Armed Forces remain unaccounted for, America will bring our fullest resources to bear in finding them and bringing them home. It is a promise we make not only to the families of our captured and our missing, but to all who have worn the uniform. Our Nation continues to recover the remains of fallen heroes we lost in the Vietnam War, the Korean War, World War II, and other conflicts. And as these patriots are finally laid to rest, we pray their return brings closure and a measure of peace to those who knew and loved them. During this day of recognition, let us honor their sacrifice once more by expressing our deepest gratitude to our service members, our veterans, our military families, and all those who have given so much to keep our country safe.

On September 21, 2012, the stark black and white banner symbolizing America's Missing in Action and Prisoners of War will be flown over the White House; the United States Capitol; the Departments of State, Defense, and Veterans Affairs; the Selective Service System Headquarters; the World War II Memorial; the Korean War Veterans Memorial; the Vietnam Veterans Memorial; United States post offices; national cemeteries; and other locations across our country. We raise this flag as a solemn reminder of our obligation to always remember the sacrifices made to defend our Nation.

NOW, THEREFORE, I, BARACK OBAMA, President of the United States of America, by virtue of the authority vested in me by the Constitution and the laws of the United States, do hereby proclaim September 21, 2012, as National POW/MIA Recognition Day. I urge all Americans to observe this day of honor and remembrance with appropriate ceremonies and activities.

IN WITNESS WHEREOF, I have hereunto set my hand this twentieth day of September, in the year of our Lord two thousand twelve, and of the Independence of the United States of America the two hundred and thirty-seventh.