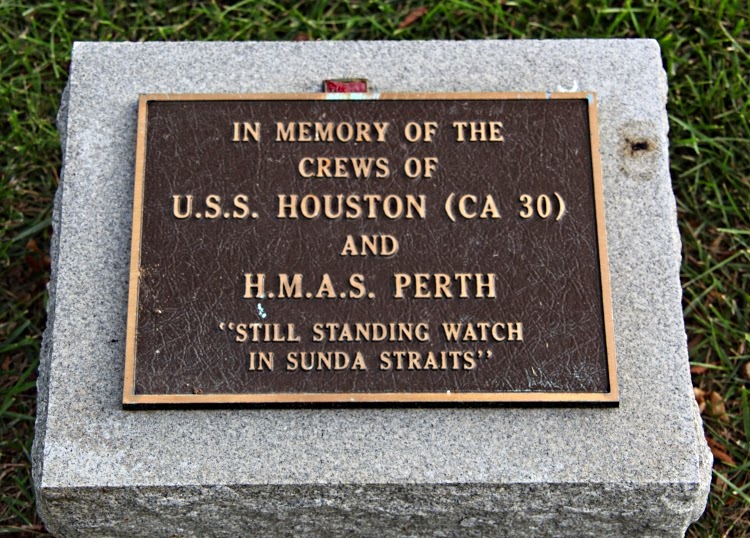 On February 28, 1942, the day after the Battle of the Java Sea, the destroyers HMAS Perth (Australian Navy) and USS Houston CA-30 (U.S. Navy) steamed into Banten Bay. They ran into a Battle Fleet of the Imperial Japanese Navy. The two cruisers may have sunk one Japanese transport and forced three others to beach. However, a Japanese destroyer squadron blocked the Sunda Strait, their means of retreat. Unable to withdraw, Perth was repeatedly hit with gun and torpedo fire and sank about about 12:30 AM local time on March 1. Houston, losing power after a torpedo hit, managed to damaged three destroyers and sink a minesweeper. Finally dead in the water, with her captain dead, she began to sink. Japanese sailors proceeded to machine-gun the decks and the men in the sea until the ship capsized and sank shortly after the Perth went down.

Of the crew of 1,061, only 368 survived including 24 of the 74-man USMC detachment aboard. The crew became prisoners of the Japanese for the remainder of the war. Most of the remaining officers were sent to Japan to be slave laborers. The rest ended up toiling on Thai-Burma Death Railway. Seventy-nine men died of torture, disease and starvation while prisoners.

The wreck of the USS Houston lies in the Sunda Strait and has over the years been damaged by scavengers and treasure hunters. The US and Indonesian Navies are developing plans to project this hallowed war grave.  Ship of Ghosts: The Story of the USS Houston, FDR's Legendary Lost Cruiser, and the Epic Saga of her Survivors by James D. Hornfischer (2006) is considered a definitive history of the ship.
at 7:50 PM