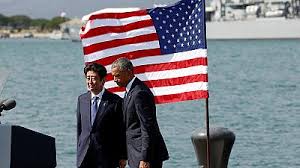 Says an Editorial appearing January 4, 2017 in THE MANILA TIMES

OFFICIALS of Japan have until last Thursday Dec. 29 taken every effort to show remorse for their forebears having started and pursued World War II.

Japan’s officials to show their remorse—and to signal to the world that their country, as the constitution commands, will never ever again go to war— avoid publicizing their visits to the Imperial Shrine of Yasukuni.

More casually known as the Yasukuni Shrine it is a Shinto shrine in Chiyoda, Tokyo. It was founded by the Meiji Emperor to honor those who died in service of the Empire of Japan. This existed from the Meiji Restoration of 1869 until the Japanese Empire disappeared with its defeat in World War II and Japan’s occupation by Allied Forces. Subsequently, the shrine’s reason for existence has been expanded to commemorate also those who died in Japan’s service during wars during the Meiji, Taisho and part of the Showa period.

The shrine honors 2,466,532 people and animals—with their names, birthplaces and dates of birth and death recorded, including 1,068 war criminals (some of whom served in or commanded forces in the Philippines).

To millions of Japanese, the dead in Yasukuni are heroes. And to prevent disdain among peoples of countries that Japanese forces invaded, occupied and committed atrocities in, Japanese officials have tried to keep their visits to Yasukuni unpublicized.

Japan Times’ Reiji Yoshida reported it, as follows, in the Times article with the head “Defense chief Inada disrupts Abe’s historic moment by visiting Yasukuni.” Here are excerpts from the article:

The move immediately drew protests from China and South Korea, former victims of Japan who regard the Shinto site as a symbol of Japan’s fervent militarism from the 1930s and 1940s. The shrine honors Class-A war criminals along with Japan’s war dead.

The visit is controversial because Inada, once a frequent visitor to Yasukuni, is widely regarded as a historical revisionist and an ardent defender of the wars Japan has waged. It was her first visit to the politically sensitive shrine since she became defense minister on Aug. 3.

In an apparent effort to avoid controversy, Inada skipped her regular visit on Aug. 15, the anniversary of Japan’s World War II surrender, and flew to Djibouti instead to inspect the Self-Defense Forces contingent stationed there.

Facing reporters at Yasukuni Shrine on Thursday, Inada said her visit was intended to pay tribute to “those who dedicated their lives to their country” in war.

“This year the president of the country which dropped an atomic bomb visited Hiroshima, and yesterday Prime Minister Abe visited Pearl Harbor and offered words to pay condolences” to the war dead, Inada said, referring to Obama’s May visit to Hiroshima.

“I paid a visit (to Yasukuni) with my determination to build up peace for Japan and the world with a future-oriented perspective,” Inada said in a video clip aired on NHK.

“Whatever historical view one may have, whether they are an enemy or ally, I believe people in any country would understand the act of paying tribute and expressing appreciation for those who dedicated their lives to their country,” she added.

Yasukuni honors the souls of 2.46 million people, mainly Japanese soldiers. Among them are 12 convicted Class-A war criminals from World War II, including wartime Prime Minister Gen. Hideki Tojo, and another two suspects who died in detention.

Many supporters of the shrine are right-leaning nationalists who defend Japan’s offensives against China and the West. Inada is considered among them, although she has pledged in public to uphold the government’s official apology statements on World War II as defense chief.

In December 2013, Abe made a visit to Yasukuni Shrine that drew protests from China, South Korea and even the United States. He has since refrained from visiting in public.

Abe, Inada and other lawmakers who have visited the shrine have all emphasized that they did so to commemorate those who were killed, not to justify the acts of war criminals.

Still, visits by Cabinet ministers have created controversies throughout the postwar era.

Before becoming defense chief, Inada was policy chief of the ruling Liberal Democratic Party and often visited the shrine.

(These excerpts are copyrighted by the Japan Times (Tokyo) and distributed by Tribune Content Agency, LLC.)
at 12:50 AM