From September 30 - October 11, 2017,  nine Americans journeyed to Japan to recover their past. They were part of the 9th delegation of Americans who were POWs or families of POWs who were guests of the Japanese government. In 2009, the Obama Administration persuaded the Japanese to initiate a program of reconciliation with the American POWs of Japan, one of the many groups of people who were dependent upon Imperial Japan's care and instead received unimaginable abuse. Secretary of State Clinton wanted to help a unique cohort of American veterans who had been ignored by previous administrations as well as present the Japanese with a template toward reconciliation. The first trip was in October 2010.

Whereas the first trip was composed entirely of POWs, their wives, and caregivers, this trip included only one former POW.  His profile is below. His biggest wish was to see the mine where he suffered so much as a slave laborer. It is said that his eyes welled with tears when Mitsubishi Materials company officials escorted him to the mine's entrance and apologized.

American Defenders of Bataan and Corregidor Memorial Society works with the U.S. State Department and Japan's Ministry of Foreign Affairs

Henry Tilden Chamberlain, 95, is a resident of Edmunds, Washington. His daughter Rebecca Chamberlain, 56, who accompanied him to Japan was born in Okinawa, Japan at the Kadena Air Base. She is a real estate agent in the Seattle region.

Mr. Chamberlain was born on the family’s kitchen table June 6, 1922 in Morse Bluff, Nebraska. An only child, he moved with his mother after his parents’ divorce to Omaha, Nebraska. Needing to earn a living, he dropped out of high school to work as a messenger for Paxton & Gallagher Wholesale Grocery in Omaha. On his 18th birthday (June 6, 1940), he enlisted in the United States Army at Fort Crook, outside Omaha. He received his basic training at McChord Field near Tacoma, Washington and Fort George Wright in Spokane, Washington. His surgical school training was at Fort Lewis, the precursor of today’s Madigan Army Medical Center.

Chamberlain was sent to Philippines from San Francisco aboard the USAT Willard A. Holbrook in October 1941. He first served at the hospital at Fort William McKinley, but was soon stationed at what was considered, if war were to break out, a neutral medical facility, Sternberg General Hospital in Manila as a surgical technician. There was a mistaken belief that the Japanese would not bomb a hospital. After the Japanese attacked the Philippines on December 8, 1941, Sternberg was shelled and evacuated in three phases starting on December 22nd. One group went to Bataan General Hospital #1 and another with patients to Corregidor Island. Chamberlain was with the third group that went by boat to Bataan General Hospital #2 along the Real River near Cabcaben and commanded by Col James O. Gillepsie and surgeon Lt Col Jack Schwartz. It was less a “hospital” than a sprawling outdoor facility with a few tents and natural canopies of bamboo, mahogany, and acacia for shade and cover.

Although under constant shelling and fast running out to food and medicines, Hospital #2’s patients, including wounded Japanese, swelled to thousands, possibly as many as 20,000. According to a U.S. Army study, in the last weeks of the Battle of Bataan most of the new admittees suffered from malaria, dysentery, malnutrition, and exhaustion. There were 150 non-battle-related deaths per day due to disease and malnutrition.

Upon surrender, the Japanese looted the Hospital of food and medicine and the patients of their personal possessions. An American woman volunteer at the Hospital too ill to be evacuated was gang-raped. The Japanese soon encircled the Hospital with artillery aimed at Corregidor making the site a target for Corregidor’s great guns. Filipino patients were immediately forced leave, which resulted in their becoming part of the Bataan Death March. Most of these men soon died.

Remaining patients and staff were removed toward the end of May north to Cabanatuan #1. Chamberlain, sick with malaria and dysentery, remembers little of this transfer that included a truck ride to Bilibid Prison, a suffocating cattle car train trip to Cabanatuan City, and a delirious march to the Camp. There he was a medic at Zero Ward, where men were sent to die. Without medicines or food, there was little he could do. When his frustration met its limit, his momentary defiance was met by a savage beating and deep cigar burns. He volunteered for the diphtheria ward as he had immunity from childhood and it was where the Japanese guards did not venture.

After, over two years at the Cabanatuan POW camps assisting the medical team as well as doing subsistence farming, he was among 1,100 POWs on October 1, 1944 loaded atop coal or horse feces in the holds of the “Hell ship” Hokusen Maru (called the Benjo “toilet” Maru by the POWs) in Manila. It turned into one of the longest “Hell ship” voyages of the war. The voyage to Moiji, Japan via Hong Kong and Formosa was marked American submarine and air attacks. As a substitute for water that was rarely sent down the hold, Chamberlain would mop up the condensation on the wall of the hull. The heat and filth in the hold paired with beriberi, dysentery, bronchitis, pneumonia and starvation to accelerate the death rate. Funeral services were not allowed for the dead who were sent overboard.

On Formosa, Chamberlain was among the POWs taken in early November to the Toroku POW Camp (today the site of Gouba Elementary School, Touliou) to recover from the trip's ordeal while doing subsistence gardening and work at a sugar mill. In late January, the survivors departed for Japan aboard the Enoshima Maru. At the Port of Moji, he was sent north to Hosokura near Sendai to mine lead and zinc at Mitsubishi Mining’s Sendai #3-B POW camp. Today, the site is the Hosokura Mine Park and displays a plaque by Mitsubishi Materials Corporation memorializing the POWs who were slave laborers at the mine. 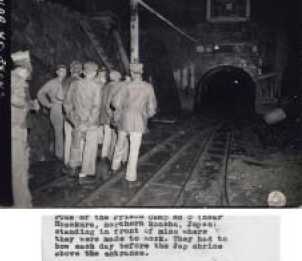 Rescued on September 12th, he was taken to a hospital ship at Sendai and then on to the Philippines and to Madigan Army Hospital in Tacoma, Washington. He fondly remembers a black WAC who devoted herself to taking extra care of the POWs on her ward. Altogether he had over a year of covalence to recover from malaria, dysentery, and PTSD. However, he found life in the U.S., free from strict expectations, difficult. As a result, he stayed in the Army, eventually transferring to the new U.S. Air Force. Stationed at Fort George Wright, he met Dorothy, a surgical technician with the Women's Army Corps (WAC), who he married November 14, 1947. Married for 60 years, they lived around the world, including a tour in Okinawa where their youngest of seven children was born. Dorothy passed away in 2007.

After 28 years in the Air Force, Chamberlain retired as a Senior master sergeant (SMSgt), with 100% disability due to the conditions he suffered as a POW. He returned to western Washington where he finished his B.A. degree through the University of Maryland, College of Special and Continuation Studies, which the first university to send faculty overseas to educate active-duty military personnel. For 15 years, he was the National Service Officer for the American Ex-POW organization (AXPOW).