Finally, a funeral for the Rabbi of Cabanatuan 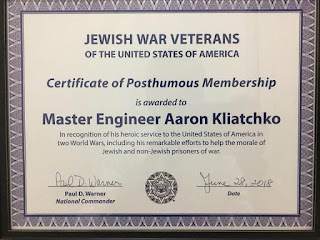 On Friday, June 29, 2018 at Arlington National Cemetery the Kaddish--the Jewish prayer to remember the dead--was finally and officially chanted for Army Corps of Engineers Master Sgt. Aaron Kliatchko, the Rabbi of Cabanatuan.  Although there was no body to occupy his grave, a tombstone now stands to honor him. After the formal military funeral, which included a Rabbi, a Priest, and the Joint Force Headquarters-National Capital Region U.S. Army Military District of Washington Command Chaplain Col. Terry Austin, a reception was held at the National Museum of Jewish Military History in Washington, DC,

Aaron Kliatchko died on December 31, 1944 aboard the Japanese hellship Brazil Maru as it arrived in Takao Harbor, Formosa from the Philippines bringing the last of the Allied POWs from the Philipines to Japan. His remains have never been accounted for.

Kliatchko was born in 1887 to an Orthodox Jewish family in Minsk, the capital of today’s Belarus. As a teenager he was forced to serve in the Russian Imperial Army during the Russo-Japanese War (1904-05). He was only 17 when he became a prisoner of war of Imperial Japan.

After the war, he studied to become a Cantor, a singer of Jewish liturgical music. Instead, in 1907, he emigrated to the United States. Finding work in the lower East Side of Manhattan must have been a challenge. Thus, in February 1910, he enlisted in the U.S. Army at the Fort Slocum, New York recruiting depot. He was assigned to the Coastal Artillery Corps and stationed in New London, Connecticut and at Fort Terry, New York.

During his enlistment and after his discharge in February 1913, Kliatchko studied for and completed an engineering correspondence course. This distinction allowed him to reenlist in the U.S. Army in December 1914 with Army Corps of Engineers. He had become a U.S. citizen in July 1913.

It is unclear where he was stationed when the U.S. entered World War I in April 1917. He spoke of being sent to France in June 1917 with the first engineers to join the American Expeditionary Forces. While teaching math to young neighbors on the Philippines, Kliatchko retold many stories of battles in France, including the Battle of Argonne Forest, the final Allied offensive of the War, which ended November 11, 1918. His accounts were so vivid that many may have thought he was there.

There is a record, however, that he was aboard the troop transport USAT Thomas in November 1915 to the Philippine Islands. On December 7, 1917, he was promoted in the Philippines to Sergeant First Class of Company A, 3rd Engineers. This regiment was stationed there to help modernize the fortress island of Corregidor in Manila Bay and the infrastructure of the Philippine Islands, a territory of the United States since 1898.

On October 15, 1918, shortly before the end of WWI, he was promoted to Master Engineer, Junior Grade. Discharged in August 1919, Kliatchko remained in the Philippines where he worked with the then-American construction and engineering company Atlantic Gulf & Pacific Co (today’s AG&P). He was the project engineer for the Angat Dam that supplies water to Metro Manila and irrigation in Bulacan.

Kliatchko retired in the early 1930s to become a gentleman farmer. He married and raised a family of ten. When the Japanese invaded the Philippines in December 1941, the former solider, now 55, reportedly volunteered as an American intelligence agent under the codename “K.V.” In March 1942, he left his family and joined American troops fighting the invading Japanese on the Bataan peninsula. There he re-enlisted with the U.S. Army and was designated the rank of Master Sergeant with the Army Corps of Engineers. Some records simply note he was a “surveyor,” to protect his identity.

He was on Bataan when U.S. forces were surrendered on April 9, 1942 and, at 55, for the second time he became a prisoner of Imperial Japan. Kliatchko then survived one of the most infamous war crimes of WWII, the Bataan Death March. He also survived the squalid, makeshift POW Camp O’Donnell where men died at the rate of 300 per day.

In June 1942, after the Japanese released the captured Filipino soldiers, the surviving American POWs were moved to the Cabanatuan Prison Camp. Conditions were better than at O’Donnell, but not by much. Food, clothing, water, and medicine remained scarce. There he remained until December 1944.

According to records, as of June 1943, Cabanatuan had 121 Jewish prisoners. Kliatchko, who had been trained as a Cantor, found a calling to help lead Jewish services and funerals. With his long white beard and impressive bass voice, he soon became known as the “Rabbi of Cabanatuan.” His singing of the Jewish prayers comforted Jew and Gentile alike.

At the camp, the Japanese assigned him to shepherd carabaos (water buffalo) that transported supplies from the town to the POW camp. The task gave him the opportunity to smuggle notes, money, and medicines for his fellow prisoners. Unfortunately, his Japanese captors eventually discovered his courier service and subjected him to months of solitary confinement with reduced rations.

On December 13, 1944, Kliatchko was among more than 1,600 prisoners, mostly officers and medical personnel, who were boarded in the holds of the hellship Oryoku Maru, destined for slave labor in Japan. It was the last hellship from the Philippines to Japan. Barely a day out of Manila, near Subic Bay, American bombers off the carrier USS Hornet sunk the ship. Dodging bullets from Japanese soldiers, the survivors made it to shore. There they were kept a week on an abandoned tennis court exposed to the tropical sun with little water and no food.

Finally moved inland and then to a new dock north of Subic Bay, the men were put aboard two other hellships to continue the voyage north. Kliatchko died from his wounds on December 31, 1944 aboard the Brazil Maru as it arrived in Takeo Harbor, Formosa.

It is unknown where his body rests. Ordinarily, the Japanese, with no ceremony, would throw the dead into the sea. It is possible, however, his remains are among those buried on shore in Formosa after the American bombing of the Enoura Maru.

These men were disinterred after the war and reburied in graves marked “Unknowns” in the National Memorial Cemetery of the Pacific in Hawaii.

Less than 600 of the original shipment prisoners from the Oyroku Maru survived to voyage’s destination of Moji, Japan on January 30, 1945. Many died of wounds and exposure as the days became increasingly cold. At least 100 died the first few days on Japanese soil. Those remaining were soon put on new hellships to Korea and then taken by train to a POW camp at Mukden in northern China.

Barely 400 of these men survived the war. Some believe the Americans were taken to China not to be slave laborers, but to be hostages. All the senior military officials from surrendered Allied forces were moved to or near Mukden by 1945. There is no extant documentation, however, of this theory.

In 1948, Master Sgt. Kliatchko was posthumously awarded the Medal of Freedom, the highest honor the U.S. can give a civilian.
at 11:36 PM