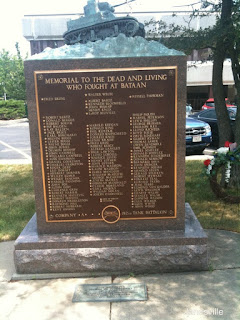 [Extensions of Remarks] [Pages E429-E430]
From the Congressional Record

HON. BRYAN STEIL
of Wisconsin
in the House of Representatives
Tuesday, April 9, 2019

Mr. STEIL. Madam Speaker, today I rise in honor of National Former POW Recognition Day and the 77th anniversary of capture of U.S. soldiers on the Bataan Peninsula in the Philippines to the Imperial Japanese Army and the beginning of the Bataan Death March.

In November 1941, 99 soldiers from my hometown of Janesville, Wisconsin arrived on the Bataan Peninsula. These soldiers were known as the "Janesville 99" and composed Company A of the U.S. Army 192nd GHQ Light Tank Battalion. Less than three weeks after arriving to the Philippines, on December 8, 1941, Imperial Japan attacked.

For the next four months, out-gunned and under-supplied, sick and starving, these brave Wisconsinites fought the Battle of Bataan against a substantial Japanese invasion force. On April 9th, they were captured, tortured, and subjected to the Bataan Death March.

Only 35 of the original Janesville 99 returned after the War. This is a solemn reminder of the bravery and selfless sacrifices our service members make for our freedom. In Downtown Janesville, there is memorial to honor the Janesville 99. We must never forget our local heroes.

When President Ronald Reagan created the permanent National Former Prisoners of War Recognition Day on April 9, he said: ``. . . It is truly fitting that America observe April 9 in recognition of our former prisoners of war; that date is the 46th anniversary of the day in 1942 when U.S. forces holding out on the Bataan Peninsula in the Philippines were captured. Later, as prisoners of war, these gallant Americans were subjected to the infamous Bataan Death March and to other inhumane treatment that killed thousands of them before they could be liberated. In every conflict, brutality has invariably been meted out to American prisoners of war; on April 9 and every day, we must remember with solemn pride and gratitude that valor and tenacity have ever been our prisoners' response.''

Today, we recognize those who the fought the impossible and endured the unimaginable for freedom from tyranny and oppression. I thank all our POWs for their sacrifice. May the Janesville 99 rest in peace.
at 4:36 PM