Medal of Honor for POW 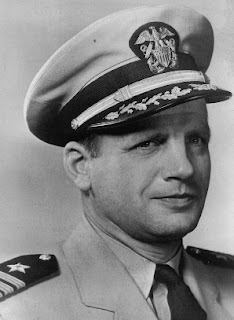 Sometime in mid-April in 1942, Navy Lt. Richard Nott Antrim held at the Makassar POW Camp on Celebes, Netherlands East Indies does the unthinkable.

He steps forward to stop a savage beating by Japanese prison camp guards of another officer. The man was near death when Antrim asks to take on the rest of prostrate officer's punishment. His bold gesture stopped the guard and led to cheers from the 2,000 men gathered to witness the atrocity.

To the astonishment of all, he succeeds in stopping the murder.  And, he is not beaten himself. This almost never happened in a Japanese POW camp. Both the Japanese and the POWs felt that they had witnessed uncommon bravery and selflessness.

Antrim was the Executive Officer of the destroyer USS Pope (DD-225) that was sunk on March 1 after the battle of the Java Sea. He was one of the few of Pope's crew, after days in the water and regularly strafed by Japanese machine guns, to be rescued by the Japanese destroyer Inazuma. Also rescued were men from the HMS Exeter and HMS Encounter.

These rescues by the Inazuma under the command of Commander Shunsaku Kudō (工藤 俊作) was also act of extreme bravery and character. Kudo rescued 442 enemy British and American sailors from the Java Sea in contrast to other Japanese warships that ignored, mowed down, or shot the drowning men in the waters off Java. Commander Kudo so shaken by the "uniqueness" of what he had done, never spoke or wrote about his humanitarian act. Japanese rightists have used this rare story as proof that the Japanese never harmed POWs. A number of books and films have been produced to highlight this.

Antrium,  an Indiana native, and Naval Academy graduate (1931), was the only man during World War II to receive the Medal of Honor for acts performed while in captivity. He was recommended for this honor by the camp’s senior POW officer, Lieutenant Commander Thomas A. Donovan (Naval Academy 1928) from the seaplane tender USS Langley (CV-1), who had been left behind by a rescue ship after a brief stop on Christmas Island.
at 5:12 PM