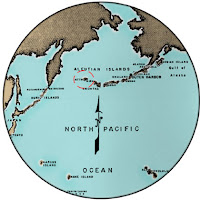 On Sunday, June 7, 1942, in the midst of the Battle of Midway (June 4–7, 1942) and six months after Imperial Japan's attack on Pearl Harbor, the 301st Independent Infantry Battalion from the Japanese Northern Army landed unopposed on the Alaskan islands of Attu and Kiska.

Attu’s radio operator and handyman, Charles Foster Jones, was executed (his wife was told he committed suicide) during the invasion and his wife Etta, the island’s schoolteacher, taken prisoner. To prove to her that he was dead, Etta's Japanese capturers presented her with Charles' body. And then, before her, beheaded him.
Mr. Jones is the only non-military-related civilian buried in the military cemetery at Joint Base Elmendorf-Richardson, in Anchorage.

The traumatized Mrs. Jones was sent to Yokohama, Japan (4573 Izumi-cho, Totsuka-ku) as a prisoner of war in July 1941.

Alone for many months, she was eventually joined by Australian nurses captured in Rabuel, New Britain.

The Aleut (Unangan) villagers were also considered prisoners of war and confined to the immediate vicinity of the village. The Japanese fearing that they would become a fifth column, shipped them to Northern Japan in September. They were lodged in the small rooms of dormitory for single employees of the National Railroad in Wakatake-Cho, Otaru City in Hokkaido.

Of the 42 Aleut captives sent to Japan, 16 (40%) died from disease, despair, and starvation. None were allowed to return to their island home.

Half of these Native Alaskans -- twenty -- were already suffering from advanced tuberculosis. Their symptoms had been diminished by the hi-protein and hi-calorie diet (salmon, seal and whale) of Attu, but quickly resurfaced due to poor hygienic conditions on the ship and inadequate nutrition in the Japanese diet.

The POW years for Attu's residents were the usual story of Imperial Japan's internment camps, forced labor, abuse, and rape. They were a slow torture of hunger and isolation. They could not adapt to the loneliness, the local diet, and often became sick.

The battlefield area on Attu was designated a National Historic Landmark in 1985. The U.S. Fish and Wildlife Service owns and manages Attu as a part of the Alaska Maritime National Wildlife Refuge.

For the 75th Anniversary of the liberation of Attu, award-winner Japanese director Tadashi OGAWA premiered a documentary on the invasion,  When The Fog Clears.

Records show at least 12 Alaskans were POWs of Japan. Mrs. Jones and the 42 Aleuts are not counted among them. None of the prisoners received compensation from either Japan or the United States.