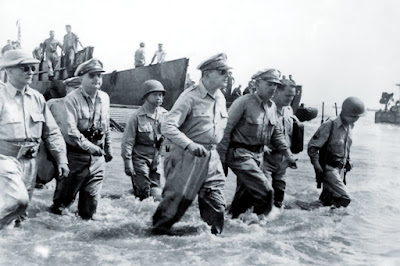 General Douglas MacArthur Fulfills His Promise and Returns to the Philippines in Victory
Red Beach, Leyte
October 20, 1942
despite long-held belief this photo was not staged
this one is confused with one in December 1942 on Luzon that was

October 20th, is the 75th Anniversary of General Douglas MacArthur's return to the Philippines. The iconic photo above by then-Capt Gaetano Faillace, an army photographer assigned to MacArthur, contrary to popular belief, was not staged. According to HistoryNet, what "may have appeared as determination [on MacArthur's face] was, in reality, anger. MacArthur was fuming. As he sloshed through the water, he stared daggers at the impudent beachmaster [who refused to send a smaller craft to assist the General ashore], who had treated the general as he probably had not been treated since his days as a plebe at West Point. However, when MacArthur saw the photo, his anger quickly dissipated. A master at public relations, he knew a good photo when he saw one."

It can be speculated that MacArthur's rush to stand on Leyte on October 20th before the fighting had ended and the critical battles had begun may have had another PR purpose. In the U.S., it was still October 19th. As he and many Americans at the time would have known, October 19th was a seminal date in American history: it was decisive victory in 1781 of the Americans over British forces and the surrender of General Cornwallis at the Battle of Yorktown (VA). This was the last major battle of the Revolutionary War and set the stage for a negotiated end to the conflict. The formal surrender at Yorktown was at 2:00pm; MacArthur stepped ashore at Leyte at 2:00pm.

For the POWs in the Philippines the retaking of the islands meant certain death. In addition to the rumors of a "kill all" order--which was enacted in Palawan on December 14, 1944 with the incineration of 150 POWs--there appeared to be an intensified effort to ship as many POWs to Japan and China, as with the Oryoku Maru that left Manila on December 13th. Although, there do not appear to be any documents that suggest this, it is likely these men, mostly officers, were being rounded up to be used as hostages when Japan was ready to negotiate an end to the war. Any surrender would have to be at a cost of the enemy and bitter.
at 1:04 AM