Historic Ceremony for POW of Japan 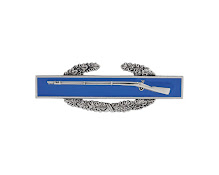 On January 4, 2021, Simsbury, Connecticut resident Daniel Crowley, 98, will finally receive his Combat Infantry Badge (CIB) for his service with the Provisional Army Air Corps Infantry Regiment defending the Bataan Peninsula in the Philippines against the invading Imperial Japanese forces in the early months of WWII in 1942. Until this ceremony, the U.S. Army has refused to confer the CIB to the provisional soldiers on Bataan.

Dan will also receive his Prisoner of War Medal and recognition of his previously unknown 1945 promotion to Sergeant at a noon ceremony at Connecticut’s Bradley Air National Guard Base presided over by Gregory J. Slavonic, Under Secretary of the Navy, PTDO vice Acting. At the ceremony a representative of Dan’s former employer Northwestern Mutual will announce a donation in his honor to the American Defenders of Bataan and Corregidor Memorial Society.

Under Secretary Slavonic with his Executive Assistant CAPT G. J. Leland, a former commanding officer of the multipurpose amphibious assault ship USS Bataan (LHD 5,) worked with the Secretary of the Army to research and confirm all the awards and promotions Dan had earned in WWII.

Dan arrived in the Philippines in the spring of 1941 with the U.S. Army Air Corps. Within hours of the December 7, 1941 Japanese attack on Pearl Harbor, the military airfields in the Philippines were also destroyed. With surviving airmen, he was sent to defend the Bataan Peninsula. Dan avoided the Bataan Death March in April 1942 by swimming to Corregidor and fighting with the 4th Marines. He became a POW with the surrender of all the Philippines in May of that year. Dan was liberated from a POW slave labor copper mining camp in Japan in September 1945.

The event will be livestreamed on the Connecticut Air National Guard’s 103rd Airlift Wing Facebook page at https://www.facebook.com/103aw

A leading voice for Pacific War veterans and their families, the American Defenders of Bataan and Corregidor Memorial Society (ADBC-MS) promotes education and scholarship about the POW experience in the Pacific, supports programs of reconciliation and understanding, and advocates for a Congressional Gold Medal for the POWs of Japan. The ADBC-MS is the point of contact for all official U.S. government activities affecting American POWs of Japan.

Over 26,000 Americans were POWs of Imperial Japan. There were more than 200 from Connecticut. Nearly 11,000 died in POW camps, aboard “hell ships,” or as slave laborers for Japanese companies.