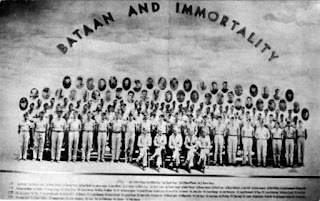 In the Philippines that day, 89 men from Maywood, IL, who made up Company ``B'' of the 192nd Tank Battalion--federated National Guard units from Illinois, Wisconsin, Kentucky, and Ohio--defended Clark Field from invading Japanese forces. They had arrived in the Philippines less than 3 weeks earlier.

These Illinois tankers watched helplessly as Japan's modern planes flew beyond the reach of their guns and destroyed the airfield. They then fought valiantly on the Bataan Peninsula with antiquated weapons and dwindling supplies. Relief from the United States never came. Though they held out for months, the men, overcome with fatigue, starvation, and disease, were surrendered by their commanders on April 9, 1942.

What followed was the infamous Bataan Death March 100 miles up the peninsula to a makeshift prison camp. Thousands died. Maywood, a hamlet outside of Chicago, had the greatest number of men from any single American town on the Death March. They would not all make it home. Those who survived the initial march endured 3 and a half years of death camps, brutal forced labor, and unimaginable abuse. More than half the Americans taken prisoner on Bataan died before they could see the war's end. Of the 89 Maywood men of Company ``B'' who left the U.S. in 1941, only 43 returned home in 1945.

For 79 years, Maywood has celebrated and remembered its heroes of Bataan with an annual September Memorial. Like many important celebrations in COVID, this was the second year that the memorial had to be postponed. But we do not forget the men of Maywood. From the Bataan-Corregidor Memorial Bridge in Chicago to Maywood's Bataan Memorial Park, my home State of Illinois recalls daily their sacrifice for liberty.

As a retired member of the Illinois National Guard myself, today is a solemn day--a day that will forever live in infamy--when we are reminded of the sacrifices made and the brave lives lost in service to our Nation. I am proud to have served with my Illinois National Guard family and work to continue to bring respect, remembrance, and honor to such a strong legacy.

Therefore, I ask my fellow Senators to join me on this 80th anniversary of Japan's surprise attack on Pearl Harbor and to remember the other Americans who fought and died throughout the Pacific that day. Although the aim of the December 7 surprise attack on Hawaii's Pearl Harbor was to destroy the U.S. Pacific Fleet in its home port and to discourage U.S. action in Asia, the other strikes served as preludes to full-scale invasion and brutal military occupation.

I further ask my colleagues to join me in commending the hard work and dedication of Maywood Bataan Day Organization President Col. Richard A. McMahon, Jr., and his board of directors, as well as Ms. Jan Thompson, president of the Illinois-based American Defenders of Bataan and Corregidor Memorial Society, who are committed to honoring and preserving the history of the men and women of Bataan who gave so much in the fight against tyranny and fascism. They, too, are the part of the story of Pearl Harbor Day and in keeping the memory of the men of Maywood alive to this day.
at 2:26 PM