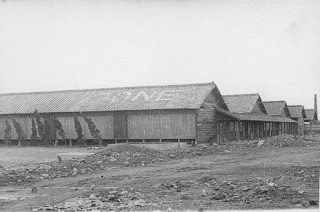 Last year, your editor was searching Congress.gov for any legislation that mentioned the Bataan Death March. I found the following celebration of the life of Cpl Walter Gann from Mississippi. Although pleased that another POW received recognition, I was soon shocked at how poorly written the insertion was as well as how full of inaccuracies it was. No one also took the time to check the proper titles for his military awards.

As we are on mission to tell the incredible history of the American POWs of Japan, I contact the author, Congressman Trent Kelly's (R-MS) office, and offered to correct it. I offer the two versions that now appear in the Congressional Record for you to better understand the importance of getting the history right.
Mr. Gann survived being a POW, but suffered severe PTSD and health issues the rest of his life making permanent employment impossible. By the grace of God and a wonderful family he lived a full life dying in 1980 at 58.

RECOGNIZING THE LIFE OF WALTER GANN

(Extensions of Remarks - April 19, 2021)
RECOGNIZING THE LIFE OF WALTER GANN
______
HON. TRENT KELLY of mississippi
in the house of representatives
Monday, April 19, 2021
Mr. KELLY of Mississippi. Madam Speaker, I rise today to celebrate the life and service of Corporal Walter Gann, an American hero and an outstanding representation of the state of Mississippi. Walter Gann was born on January 31, 1922 to John and Mary Rogers Gann.
He spent the first eighteen years of his life in Calhoun City, Mississippi. Only July 3, 1941 he joined the United States Army Air Forces in Jackson, Mississippi and was soon deployed to the Philippines. At eighteen years old Walter faced attack by the Japanese Imperial Army. After several months of battle with minimal food, supplies, and medical care, the American soldiers were forced to surrender; the Bataan Death March began on April 9, 1942. Corporal Gann, enduring shrapnel wounds and malnutrition, marched 65 miles in the blistering heat.
It is believed Corporal Gann arrived at Fukuoka POW Camp No. 1 on Kyushu Island where he faced barbaric treatment from Japanese guards. He was eventually transported to Japan; Gann and his fellow soldiers stood shoulder to shoulder on the Japanese hell ship. Men died by the dozens of suffocation, starvation, and dysentery. In Japan, Corporal Gann was a POW for three and a half years.
Corporal Gann was released upon American Victory and was immediately treated in a Washington hospital before returning home. His family rejoiced to see him alive and safe. He was called to testify in the war crime trials following WWII but could not attend because he was hospitalized. For the remainder of his life Corporal Gann bore the weight of all he had witnessed.
In 1949 Walter moved to Booneville, Mississippi and married Juanita Goddard. Together they raised four children. In August of 1963 his wife passed, and in November of that year his son was killed in a motorcycle accident. In 1970 he moved to Chattanooga, Tennessee until his death on October 14, 1980. He was laid to rest at Crossroads cemetery in Jumpertown, Mississippi with his wife and son.
In the course of his life Corporal Gann was awarded the Good Conduct Medal, a Purple Heart, the WWII Victory Medal, an A.P. Theater Medal with 1 Bronze Star, the American Defense Medal with 1 Bronze Star, and the Philippine Liberation Medal with 1 Bronze Star. He also received a letter from President Harry S. Truman thanking him for his service to the United States.
I am grateful for the service of Corporal Walter Gann and admire his commitment to faith, family, and country.

CORRECTED
RECOGNIZING THE LIFE OF WALTER GANN
Congressional Record Vol. 167, No. 189
(Extensions of Remarks - October 27, 2021)
RECOGNIZING THE LIFE OF WALTER GANN
______
HON. TRENT KELLY of mississippi
in the house of representatives
Wednesday, October 27, 2021
Mr. KELLY of Mississippi. Madam Speaker, I rise today to celebrate the life and service of Corporal Walter Gann, an American hero from Mississippi, who defended liberty against impossible odds in the Pacific during World War II.
Walter, born in Calhoun City on January 31, 1922, joined the U.S. Army on July 3, 1941. By July 15, he was aboard the USS Coolidge deployed to the Philippines as a member of the Army Signal Corps assigned to 409th Signal Company (Aviation) at Nichols Field outside Manila. The plan was to erect radar towers, but none of the equipment needed arrived on the ship with them.
Imperial Japan attacked the Philippines on December 8 and all the critical airfields were destroyed by December 10. Walter's company and the airmen were soon sent on combat duty in the Bataan Peninsula. He was assigned to U.S. Army Forces Far East (USAFFE) headquarters at Little Baguio near the tip of Bataan.
The troops on Bataan, running out of ammunition, food, and medicine, with no hope of resupply or reinforcement, were surrendered by their commanding officers on April 9, 1942. Walter was among 86,000 American and Filipino prisoners of war who were forced on what became known as the infamous Bataan Death March, one of World War II's worst war crimes. In the tropical sun, deprived of food, water, and mercy, the men trekked 65 miles up Bataan to a train station. There they were packed standing 100 to a boxcar for the next 24 miles. Men died where they stood. Survivors marched another eight miles to their first POW camp, O'Donnell.
Walter, POW No. 203, was shipped to Japan in July 1943 packed in the dark, fetid hold of the hell ship Clyde Maru with 500 other POWs. He was sent to be a slave laborer at Fukuoka No. 17 POW Camp attached to the Mitsui-owned Miike coal mine in southern Japan close to Nagasaki. Starved, beaten, and denied medical care, he was forced to dig coal in a primitive mine until the camp was liberated in September 1945. The coal mine is now a UNESCO Industrial World Heritage site, albeit without mention of the thousands of POWs held there or that the mine had remained reliant on manual labor and not modem machinery.
Although asked to testify in Japan at the war crime trials held from 1946 to 1948, Mr. Gann could not return because he remained too sick from the various illnesses he suffered from during his three and one- half years as a POW. For the remainder of his life, Walter bore the weight of all the horror and inhumanity he had witnessed. When he was able to work, Walter was a truck driver.
In 1949, Walter moved to Booneville, Mississippi, and married Juanita Goddard. Together they raised four children. In 1963, he lost both his wife and his stepson. In his later years, he lived in Chattanooga, Tennessee, until he passed away on October 14, 1980.
During his lifetime, Walter was awarded the Good Conduct Medal, the Purple Heart, the World War II Victory Medal, the Asiatic-Pacific Campaign Medal with one bronze campaign star, the American Defense Service Medal with one bronze campaign star, and the Philippine Defense Medal. He also received a letter from President Harry S. Truman thanking him for his service. Posthumously, he received the Bronze Star Medal for meritorious achievement, the Prisoner of War Medal, and the Presidential Unit Citation with two Bronze Oak Leaf Clusters.
I am grateful for Corporal Walter Gann's commitment to faith, family, and democracy. I am humbled by his sacrifices for our country.
at 12:40 PM