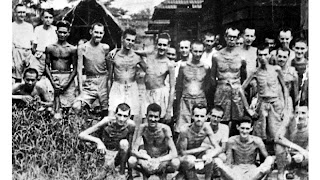 Dr. Lester Tenney's courage in November 2008 to bring to the attention of the Japanese Ambassador to the US Ichiro Fujisaki the pain and humiliation felt by American as well as all prisonors of war of Japan was historic.  His efforts have brought about apologies and visitation programs for POWs not only for Americans, but also for Australians and now Canadians.

Japanese Foreign Ministers have twice this year delivered apologies to delegations of Australian POWs. The first visited Japan in March and the second in late November. The latter delegation included the first woman POW on an official delegation, 96-year old Nurse Lorna Johnston.

Below is the Press Release issued by Canada's Ministry of Veterans Affairs announcing Japan's first apology to the POWs of Canada. Unlike for the American and Australian POWs, the apology was not delivered by Japan's Foreign Minister in front of the press. Instead, it was presented in private by Japan's Parliamentary Vice-Minister for Foreign Affairs Toshiyuki Kato. Further, the trip was paid for by the Canada's Ministry of Veteran's Affairs and not the Government of Japan.

The apology wording was the same as the one given to the American and Australian POWs, which is a slight rewording of the 1995 general war apology by Prime Minister Murayama--the only official government apology for the war. The critical phrase "damage and suffering" is a direct quote from the San Francisco Peace Treaty.

The Canadians were involved the defense of Hong Kong in 1941. Approximately 290 Canadian soldiers were killed in battle and, while in captivity, approximately 264 more died as POWs, for a total death toll of 554. In addition, almost 500 Canadians were wounded. Of the 1,975 Canadians who went to Hong Kong, more than 1,050 were either killed or wounded. This was a casualty rate of more than 50%, arguably one of the highest casualty rates of any Canadian theater of action in the Second World War.

Still missing are the apologies from the Japanese companies that purchased these American, Canadian, and Australian POWs to labor in the factories, mines, and on their docks. As one Canadian POW noted, the apology is "most important to the Japanese" as he hopes "this apology will open up the Japanese secrecy over their treatment of (POWs) during World War 2 in 14 of their captured nations." He added: "I don't think they can go on and be a healthy culture by hiding this terrible past of theirs."

Ottawa — The Honourable Steven Blaney, Minister of Veterans Affairs, and Foreign Affairs Minister John Baird today recognized the heartfelt apology from the Government of Japan to former Canadian prisoners of war (POWs) for their suffering during the Second World War. The apology was delivered earlier today in Tokyo by Mr. Toshiyuki KATO, Japan’s Parliamentary Vice-Minister for Foreign Affairs.

“It is my honour to join Canadian prisoners of war in acknowledging the apology by the Japanese Government for the treatment and suffering of prisoners of war under Japanese control during the Second World War,” said Minister Blaney. “This important gesture is a crucial step in ongoing reconciliation and a significant milestone in the lives of all prisoners of war. It acknowledges their suffering while honouring their sacrifices and courage.”

“The terrible pain and heavy burden of the Second World War have given way to a mutually beneficial, respectful relationship between Canada and Japan as mature democracies—a legacy of all who served in the Pacific campaigns,” said Minister Baird. “Today’s apology will help in healing as our two great countries move forward.”

On Christmas Day 1941, unable to fight any longer, the Allies had no choice but to surrender. During 17 and a half days of fighting, 290 Canadians were killed and 493 were wounded while trying to defend Hong Kong.

Those who survived the heavy fighting were imprisoned in prisoner of war camps in Hong Kong and Japan until Japan’s surrender on August 15, 1945. For nearly four years, the Canadians were subjected to deliberate and systematic mistreatment at the hands of their captors.

The prisoners of war were forced into backbreaking labour in construction sites, mines, shipyards and foundries, and were frequently beaten and starved. Another 267 men died in the camps before the survivors were liberated. Many of those who returned to Canada suffered serious disabilities as a result of their experiences in Hong Kong, and many died prematurely.

Minister Blaney led a delegation of Canadian Veterans of the Battle of Hong Kong to Japan for the apology and a commemorative ceremony, and visited the graves of Canadian soldiers at the British Commonwealth Cemetery – Yokohama.

For more information on Canada’s contribution in Hong Kong, visit the Veterans Affairs Canada Web site at veterans.gc.ca.
at 4:25 PM