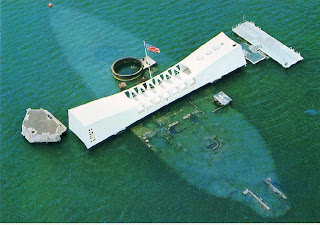 President Obama's Proclamation (excerpt)
In the wake of the bombing of our harbor and the crippling of our Pacific Fleet, there were those who declared the United States had been reduced to a third-class power. But rather than break the spirit of our Nation, the attack brought Americans together and fortified our resolve. Patriots across our country answered the call to defend our way of life at home and abroad. They crossed oceans and stormed beaches, freeing millions from the grip of tyranny and proving that our military is the greatest force for liberty and security the world has ever known. On the home front, dedicated civilians supported the war effort by repairing wrecked battleships, working in factories, and joining civilian defense organizations to help with salvage programs and plant Victory gardens. At this time of great strife, we reminded the world there is no challenge we cannot meet; there is no challenge we cannot overcome.

For Americans, December 7, 1941 will forever be ‘a date which will live in infamy.’ Our entire nation mobilized to assist the ensuing war effort. From war bonds to building our fighter aircraft, the country was united and the ‘greatest generation’ defeated forces of evil and successfully defended freedom and democracy.

Our American forbearers were brave and strong in the face of adversity. But the larger lesson of Pearl Harbor is that we need to remain steadfast and forthright in our defense of liberty and human rights. Brutal regimes and lawless nations should not be coddled or appeased.
70th Anniversary of the Pearl Harbor Attack Website
National Museum of the Pacific War
National World War II Museum
American Defenders of the Philippines Museum
JAPANESE DIPLOMACY AND MILITARY MANEUVERING PRIOR TO THE ATTACK ON PEARL HARBOR. 12/5, 12:30-1:45, Washington, DC. Sponsor: Sigur Center, GWU. Speaker: Takeo Iguchi, Former Ambassador; Professor Emeritus, Shobi-Gakuen University.
THE CAPTAIN ELLIS ZACHARIAS AND PEARL HARBOR ATTACK. 11:00am, Washington, DC. Sponsor: National Archives. Speaker: David Pfeiffer, archivist; discusses the intelligence officer featured in his article “Sage Prophet or Loose Cannon?” published in Prologue magazine. (The lecture will be repeated at the National Archives at College Park, MD.
FREEDOM BETRAYED: HERBERT HOOVER'S SECRET HISTORY OF THE SECOND WORLD WAR AND ITS AFTERMATH. 12/6, Noon-1:00pm, Washington, DC. Sponsor: Heritage Foundation. Speakers: George Nash, author, historian, book offers a revisionist reexamination of the war and its Cold War aftermath and a sweeping indictment of the “lost statesmanship” of Franklin Roosevelt.
PEARL HARBOR CHRISTMAS: A WORLD AT WAR, DECEMBER 1941. 12/7, Noon-3:00pm, Washington, DC. Author and historian Stanley Weintraub will present his latest work– an exploration of the wartime strategies that were developed in Washington while the rest of America attempted to celebrate the holiday season. Each chapter, written in pristine detail, coincides with the last ten days of 1941 and the first day of the New Year. Following the presentation, Weintraub will be available for a Q&A and book signing.
1:00pm - Guests are invited for a subsequent wreath laying ceremony with the U.S. Navy Band and Ceremonial Guard on the Memorial’s outdoor plaza.

2:00pm - In addition, the Navy Memorial welcomes local veteran survivors and witnesses of the attack for a panel discussion led by noted historian Paul Stillwell, author of Air Raid: Pearl Harbor! Recollections of a Day of Infamy. Panel members will include former U.S. Navy Memorial President and CEO Rear Admiral Edward K. Walker USN (Ret), who witnessed the battle as the young son of a submarine officer stationed at Pearl Harbor.


PACIFIC GIBRALTAR: US-JAPANESE RIVALRY OVER THE ANNEXATION OF HAWAII 1885-1889. 12/7, Noon-1:00pm, Washington, DC. Sponsor: National Archive. Speakers: William Michael Morgan, author, discusses his book Pacific Gibraltar and the results of the Japan–U.S. crisis of 1897, when the Japanese sent warships to Honolulu to oppose the annexation of the Hawaiian Islands by the United States during the Spanish-American War. As Japan began pushing for voting rights for its nationals living and working on the islands, tensions rose between the two countries. A book signing will follow the program.
IN THE LAST GOOD WAR: THE FACES AND VOICES OF WORLD WAR II. 12/7, Noon–1:00pm, Washington, DC. Sponsor: National Portrait Gallery. Speaker: Thomas Sanders combines imagery and narrative to tell the story of the courageous men and women who accomplished extraordinary feats in defense of freedom. This book provides a unique window into American history and the lasting legacy of World War II veterans.
PEARL HARBOR CHRISTMAS.12/7, 6:00–7:00pm, Washington, DC. Sponsor: National Portrait Gallery. Speaker: Stanley Weintraub marks the 70th anniversary of the attack on Pearl Harbor with a talk in the exhibition, followed by a signing of his new book Pearl Harbor Christmas.
“It Is No Joke—It Is a Real War”: HOW AMERICANS FIRST LEARNED OF PEARL HARBOR. 12/7, 7:00pm, Washington, DC. Sponsor: National Archives. Speaker: Marvin Kalb, journalist. uses film, audio, and photographic records from the National Archives and the Newseum to discuss how the media informed Americans of the 1941 attack on the naval base at Pearl Harbor, Hawaii.
Fighting for MacArthur, the Navy and Marine Corps' Desperate Defense of the Philippines. 12/15, Noon-1:00pm, Naval War College Museum, Newport, Rhode Island. Author, John Gordon discusses his new book, which is the only single-volume work to offer a full account of Navy and Marine Corps actions in the Philippines during World War II. This book provides a unique source of information on the early part of the war. It is filled with never-before-published details about the fighting based on a rich collection of American and newly discovered Japanese sources, and it includes a revealing discussion of the buildup of tensions between Gen. Douglas MacArthur and the Navy that continued for the remainder of the war.
at 9:28 AM