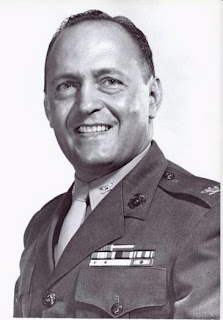 Robert A. “Bob” Bonadio, Colonel USMC (Ret) of Murrieta, Calif., a tireless advocate for American veterans, especially the American POWs of Japan, passed away January 19, 2013 surrounded by his family after an extended illness. He was 83.

Bob was born in Utica, New York on December 27, 1929 to parents Frank and Rose Bonadio. In 1948, he enlisted in the Marine Corps, and in 1949 the Marine Corps sent him to Subic Bay, Philippines. In 1950 Bob went to Korea where he served in combat with the 2nd Battalion, 7th Marines, 1st Marine Division, participating in the Chosin Reservoir “Breakout” in Korea, forever linking him to an elite group of soldiers called “The Chosin Few.” Nine Marines would be awarded the Medal of Honor for their heroic actions during the 17 day campaign, November 26 to December 13, 1950. This was the the most ever in the history of the Marine Corps in any one battle. The Marines had fought in sub-zero temperatures surrounded by the Chinese, outnumbered more than 10:1.

In late 1953, he was assigned to Camp Pendleton with the MP Battalion, and later as an Infantry Company Commander. In 1954 he was assigned to the Marine Corps Air Station at El Toro, California, serving as the Assistant Personnel Officer and Atomic, Biological and Chemical Defense Officer. During 1957, he participated in the last atmospheric nuclear tests within the continental United States at Camp Desert Rock, Nevada. He then commanded the only Marines Corps Reserve Artillery Regiment in the United States, the 14th Marine Regiment (14th Marines).


Bob retired from the Marine Corps after 42 years of active and reserve service. He was a member of the Reserve Officers Association (ROA) since 1976, plus a member of the Military Officers Association of America (MOAA). After moving to San Diego in 1994, he became the ROA Membership Chairman of the San Diego Chapter, then appointed to the National Membership Committee. From 1996-97, he served as the Navy Sections West Membership Coordinator, with responsibilities for the 24 states west of the Mississippi.

In 1977, Bob and Admiral Martin “Red” Carmody were instrumental in the opening of the Treasure Island Museum in San Francisco, depicting the American experience as lived by the men and women of the United States Navy, Marine Corps and Coast Guard.

In civilian life he was the Advertising and Marketing Manager with Pacific Bell for California and Nevada. Retiring after 26 years, Bob continued working as a consultant and even traveled to South Korea where he was contracted to put together the Yellow Pages for the city of Seoul, which flourishes today.

Bob was devoted to helping veterans find jobs. He co-authored the Jobs Partner Training Act of 1982, which gave jobs to unemployed veterans and minorities. In 1984, President Ronald Reagan commended him for his efforts with the Blind Ski Training Program in the Lake Tahoe area for all residents in California and Nevada. He often helped veterans receive their service medals.

Bob discovered WWll Navy and Marine Corps POW’s never received their back promotion pay and contacted U.S. Senator John McCain (R-AZ) who introduced legislation for these POW’s to receive their money. When Bob found out it would only be in 1942 dollars, he again appealed to Senator McCain who reintroduced legislation for the POW’s to receive their back promotion pay in current dollars. It was enacted as part of the National Defense Authorization Act for FY2008.

Bob was an inspiring advocate for the American POW’s in the Pacific who suffered horribly in Japan's slave labor camps. His last campaign was trying to persuade Congress to provide compensation to American POWs of Japan for their inhumane imprisonment. He wanted the US government to thank the POWs for their extraordinary service just as other allied governments have by providing ex gratia payments to their former POWs (for example, see recent compensation to Australian POWs). He also worked to alert California legislators of the unacknowledged use of POW slave labor by nearly all Japanese companies (Mitsui, Mitsubishi, Sumitomo, Hitachi, Kawasaki, Toshiba, Nippon Sharyo) that plan on bidding for the state's high-speed rail projects [see his 2011 letter to Governor Jerry Brown]. Bob was an Associate life member of the American Defenders of Bataan and Corregidor.

Marine Master Sergeant Donald Versaw, a former POW of Japan who fought on Corregidor 1941-42 and one of the last of the China Marines, is one of the POWs who Bob worked so hard to help. Don said, upon hearing of Bob's passing that "Col Bonadio's great effort has been a great benefit to me and my family. All of us fortunate survivors of POW experience owe him every so much." Don was a member of the China Marine Band and played the French horn. He had to destroy "his precious best friend" upon surrender to the Japanese and has never again played an instrument. As a POW, he was sent to Japan aboard a Hellship Nissyo Maru to Fukuoka-7B-Futase on Kyushu to be a slave laborer mining coal at Nittetsu-Futase Tanko Kaisha (still existing as the Nittetsu Mining Co., Ltd.). Don, like Bob, served with the 1st Marines during the Korean War.

With his beloved daughters Karen and Jean, Bob became a voice for the plight of captive elephants in the U.S, and advocated to end the exhibiting of elephants suffering in confinement in zoos across America, and those forced into a lifetime of misery in the circus. He enjoyed visiting the elephants at the PAWs Sanctuary in San Andreas, California.

Those that knew Bob would say he was relentless and a man who never gave up on any mission when it came to helping others. His love of his family, the Marine Corps, and America was evident in the way he lived his life and in the character of who he was as a man.

Bob is survived by his wife Clare of 62 years, and daughters Jean and Karen.

A memorial is being planned at Camp Pendleton. He will be buried at Arlington National Cemetery at 3:00pm on July 31, 2013.

If you would like to assist and/or contribute to efforts to protect Japan's apology to the American POWs of Japan and to persuade Japan's great companies that used our POWs as slave labor to also apologize, please contact Asia Policy Point.
at 4:13 PM