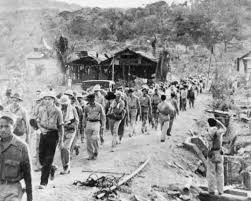 On April 9, 1942, United States forces were surrendered on the Bataan Peninsula in The Philippines. This was the largest single group of American troops ever surrendered to an enemy, some 12,000, along with 76,000 Filipino soldiers serving in the U.S. forces on Bataan. Before the day ended, the infamous Bataan Death March began. Thousands died on this 65 mile trek up the pennisula. Already weak from exhaustion, starvation, and disease, the men were cruelly pushed  forward the Japanese soldiers who offered them little water, rest, or  food. Those that straggled were beaten, bayoneted or beheaded. Men were buried alive and run over by tanks. Worse, the inhumanity had just begun for these men. The prison camp where they ended the March was disease ridden with limited food and water. Through the summer, nearly 300 a day died. Survivors would soon be put on Hellships to Japan and its possesions to work as slave laborers for Japanese companies and the military.

It is on this day, that we honor these men and those of other generations who became prisoners of war of our enemies.We honor their perservation and dignity maintained even in the most sordid conditions. Every year, the President issues a proclamation. Below is this year's.

Since the earliest days of our Republic, the brave men and women of our Armed Forces have answered the call to serve. They have put their lives on the line for our Nation, and many have sacrificed their own freedom to safeguard ours. On National Former Prisoner of War Recognition Day, we honor those who stood up, took an oath, put on the uniform, and faced immeasurable challenges far from home.

These patriots often suffered physical and mental torture during captivity. Many endured starvation and isolation, not knowing when or if they would make it safely back to our shores. Families experienced days, months, and sometimes years of uncertainty, but they showed remarkable strength that mirrored the grit of their loved ones through long stretches of imprisonment. These warriors rendered the highest service any American can offer our country -- they fought and sacrificed so that we might live in peace, security, and prosperity.

Today, we are solemnly reminded of our responsibility to care for those who have borne these burdens for us. We recommit to honoring that sacred obligation -- to serving our former prisoners of war, our veterans, and their families as well as they have served us. With unyielding pride and unending gratitude, let us fulfill our promises to the courageous heroes of generations past, to this generation of veterans, and to all who will follow.

NOW, THEREFORE, I, BARACK OBAMA, President of the United States of America, by virtue of the authority vested in me by the Constitution and the laws of the United States, do hereby proclaim April 9, 2014, as National Former Prisoner of War Recognition Day. I call upon all Americans to observe this day of remembrance by honoring all American prisoners of war, our service members, and our veterans. I also call upon Federal, State, and local government officials and organizations to observe this day with appropriate ceremonies and activities.

IN WITNESS WHEREOF, I have hereunto set my hand this eighth day of April, in the year of our Lord two thousand fourteen, and of the Independence of the United States of America the two hundred and thirty-eighth.f
at 7:21 PM