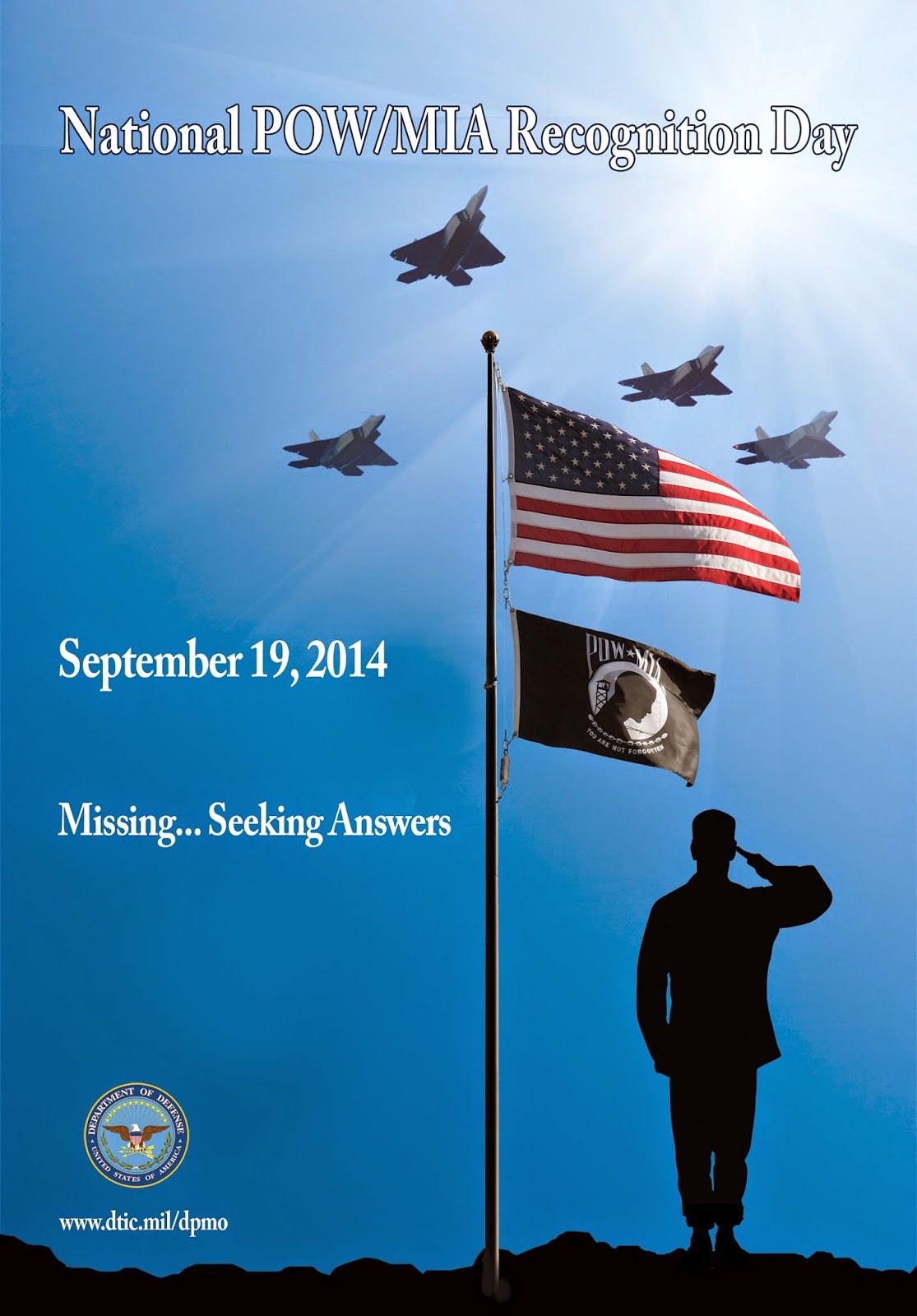 NATIONAL POW/MIA RECOGNITION DAY, 2014
- - - - - - -
BY THE PRESIDENT OF THE UNITED STATES OF AMERICA
A PROCLAMATION
America's history shines with patriots who have answered the call to serve.  From Minutemen who gathered on a green in Lexington to a great generation that faced down Communism and all those in our military today, their sacrifices have strengthened our Nation and helped secure more than two centuries of freedom.  As our Armed Forces defend our homeland from new threats in a changing world, we remain committed to a profound obligation that dates back to the earliest days of our founding -- the United States does not ever leave our men and women in uniform behind.  On National POW/MIA Recognition Day, we express the solemn promise of a country and its people to our service members who have not returned home and their families:  you are not forgotten.
My Administration remains dedicated to accounting as fully as possible for our Nation's missing heroes, lost on battlefields where the sounds of war ceased decades ago and in countries where our troops are deployed today.  Whether they are gone for a day or for decades, their absence is felt.  They are missed during holidays and around dinner tables, and their loved ones bear this burden without closure.  Americans who gave their last full measure of devotion deserve to be buried with honor and dignity, and those who are still unaccounted for must be returned to their families.  We will never give up our search for them, and we will continue our work to secure the release of our citizens who are unjustly detained abroad.  Today, we acknowledge that we owe a profound debt of gratitude to all those who have given of themselves to protect our Union and our way of life, and we honor them by working to uphold this sacred trust.
On September 19, 2014, the stark black and white banner symbolizing America's Missing in Action and Prisoners of War will be flown over the White House; the United States Capitol; the Departments of State, Defense, and Veterans Affairs; the
Selective Service System Headquarters; the World War II Memorial; the Korean War Veterans Memorial; the Vietnam Veterans Memorial; United States post offices; national cemeteries; and other locations across our country.  We raise this flag as a solemn reminder of our obligation to always remember the sacrifices made to defend our Nation.
NOW, THEREFORE, I, BARACK OBAMA, President of the United States of America, by virtue of the authority vested in me by the Constitution and the laws of the United States, do hereby proclaim September 19, 2014, as National POW/MIA Recognition Day.  I urge all Americans to observe this day of honor and remembrance with appropriate ceremonies and activities.
IN WITNESS WHEREOF, I have hereunto set my hand this  eighteenth day of September, in the year of our Lord two thousand fourteen, and of the Independence of the United States of America the two hundred and thirty-ninth.
BARACK OBAMA
at 6:41 AM