At Last in Nagaski 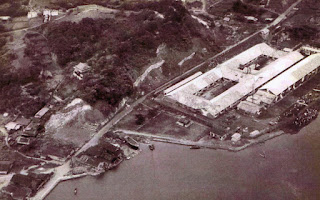 At Fukuoka POW Camp 2-B (Koyagi Camp), 499 British, Dutch, Australian and American POWs were liberated in September 1945. A total of 73 POWs perished before liberation due to disease and abuse. The POWs were slave laborers for Kawanami Koyagi Shipbuilding Co., which was purchased by Mitsubishi Heavy Industries in 1967. MHI still owns a facility at the site.

With the understanding and support from Japan’s Ministry of Foreign Affairs, Embassy of the Netherlands, Embassy of the United Kingdom, Embassy of Australia and Embassy of the United States in Japan, the Committee of the Memorial Dedication built this memorial, engraved on it the names of all who died, and sent their hearts out to all who were victimized by the war including returnees. See this Daily Telegraph article on the British POWs at the camp.

This is a particularly interesting camp as the POWs were affected by the atomic bombing of Nagasaki and some even get medical compensation from Japan. More interesting, it held the the one Japanese-American POW who did not receive a Gold Medal for being a Japanese American in combat. Frank Fujita was with the Texas National Guard and the Lost Battalion that fought and was captured on Java in March 1942. He was not discovered as Japanese until June 1, 1944.

The Memorial Unveiling and Peace Ceremony will be held as follows:
10:00 am - Chartered buses depart from Nagasaki Station to pick up people at hotels to take them to Koyagi-machi

· Guest Speech by representative from Ministry of Foreign Affairs

· Guest Speech by representative of survivors

· Speeches by representatives of four embassies

· Speech by representative of the bereaved family