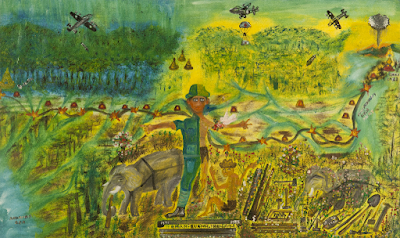 Painting by Gustav Potthoff survivor of Bridge over the River Kwai

Gustav T. Potthoff, a Columbus resident known for his paintings and the brutal conditions he endured as a World War II prisoner of war, has died.

He died at his home Thursday at age 94. Potthoff is survived by his wife, Adele; and their two children. Services are pending at Barkes, Weaver & Glick Funeral Homes.

Potthoff moved to Columbus in 1965 to begin a career with Cummins Engine Co. It was over the ensuing years that local residents learned of the cruelty he suffered, and later the joy and catharsis he experienced in creating artwork. 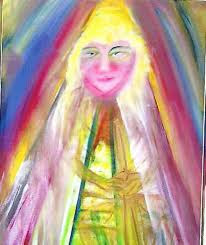 Gustav Potthoff created this painting of an angel he said was by his side while he was a prisoner
in World War II, and that follows him everywhere. Potthoff died Thursday at age 94.


He was born in Indonesia March 11, 1922, on the island of Maluku, near New Guinea and Australia, and raised in a Dutch colonial orphanage. Potthoff was a mechanic in a Dutch Indies Army battalion when he was captured by Japanese forces in 1941. Potthoff and about 1,800 other soldiers were sent to Burma to work on the Burma-Thailand railroad project that would later become widely known in the movie “The Bridge on the River Kwai.” The movie was fictional but based on real-life events.

Potthoff was a prisoner for 3½ years. He suffered from cholera, dysentery and pneumonia. He saw fellow prisoners beaten, killed at random, starved and become ill. When he was freed in 1945, only 300 of the original 1,800 prisoners he was with had survived.

After his release, Potthoff went to Holland, but in 1962 he immigrated to the United States — specifically Indianapolis. Three years later he arrived in Columbus with the help of First Christian Church as his sponsor.

In 1986, Potthoff and his wife became American citizens.

It was after Gus Potthoff retired from Cummins in 1987 that he used painting to depict memories of his time as a prisoner of war, including the forced labor of constructing the railroad. They were a way to tell what happened during his imprisonment and remember those who didn’t survive. His paintings often included images of elephants, spirits of the dead, the lush countryside, railroads, bridges and angels.

He painted many works, but never kept count of how many. Potthoff never sold his works; he always gave them away.

Potthoff’s works were displayed throughout the community, such as at IUPUC, YES Cinema, the Columbus Learning Center, the Bartholomew County Public Library and the Atterbury-Bakalar Air Museum.

He was a familiar figure at the Atterbury-Bakalar Air Museum at Columbus Municipal Airport, where he was a member of the 95ers, a group of volunteers engaged in veterans support activities.

Potthoff’s contributions to the community and his story of survival earned the admiration of local residents, who made sure he received the honor he deserved and help when needed.

When climbing the steps to his front porch had become a difficult labor, two fellow members in the 95ers — Wendell Ross and Pete Jenkins — built a ramp up those steps for their friend.

“We didn’t look on it as a chore,” Ross, former manager of Columbus Municipal Airport and a U.S. Navy veteran, told The Republic in 2012. “Gus has gone through so much in his life and served as an inspiration to anyone who ever met him. It was really a labor of love.”

Sept. 16, 2016, marked the third consecutive year that Bartholomew County honored local residents such as Potthoff, who were prisoners of war or listed as missing in action. They were honored at a local observance of national POW-MIA Recognition Day, which is the third Friday of every September.