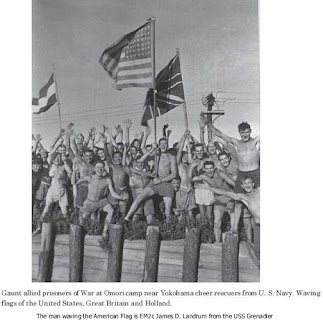 August 29, 2020 was the 75th Anniversary of the liberation and evacuation of the first POW camp on Japan's Home Islands. OMORI TOKYO MAIN CAMP

Commander Harold Stassen on Adm William Halsey's staff was in charge of the location and liberation of the POWs in Japan. Two years prior, Stassen had been governor of Minnesota. He resigned months into his third term and took up active duty in the Pacific with the Navy on April 27, 1943.
For four months, 25 April 1945 to 26 June 1945, Stassen was sent to help negotiate the UN Charter at the San Francisco Conference that took place in San Francisco, California. Returning to Halsey's staff in the Pacific sometime in July 1945, he was assigned the upcoming search and care for the POWs in Japan. This was a top priority mission for the Allies. There was a high level of concern that the Japanese would murder the POWs before they could be rescued.
To the relief of all--excepting a few isolated beheadings on the day and days after the surrender--the POWs were not killed. Stassen's first task was to locate the POW camps. The Allies knew of 30 camps in Japan. After surrender, the Japanese government provided a list (called the "Yellow List") identifying 73 camp locations. This proved to be less than half the actual number of camps. Navy reconnaissance and POW interviews tracked down the others. They found 158 POW camp sites across the Home Islands.
Next was to coordinate POW relief supply air drops to the sick and starving men and women.  Starting on August 27th, Army Air Force planes dropped 4,470 tons of food, medicine, clothing, and cigarettes on the POW camps in Japan. See the "Report on POW Supply Missions" for more details. By the end of September 1945, nearly all of the 32,000 Allied POW's in Japan had been processed and on their way back home.
On August 29th, Stassen positioned hospital and transport ships in Tokyo Bay and then at mid-afternoon directed a flotilla of Navy launches to a POW-made island close to shore and the Omori POW Camp. The first three boats held battle-hardened Marines who immediately secured the perimeter and established a communications command. Next, with famed Navy and Hollywood photographer John Swope at his side, Stassen arrived to command the rescue operation.
Swope's iconic picture of ecstatic POWs waving their handmade national flags will forever represent liberation.In addition to American POWs, there were POWs from the UK, Australia, Canada, the Netherlands, Estonia, Italy, Norway, and New Zealand. The camp held famed aviators Louis Zamperini and Pappy Boyinton, the commanders of the USS Grenadier and USS Tang, as well as many downed aviators who were tortured nearby at the Emperor's horse stables.

Once on the island, Stassen was met by the camp's commander who told him he could not take the POWs as no authority from Tokyo told him to release the prisoners. The over six foot tall, Stassen glared down at the Emperor's representative and reportedly then grabbed the Japanese colonel by the front of his tunic and lifted him off the ground, and said, "I have no need for orders from Tokyo to do what I want to with these American prisoners." And so, that ended that.

Within hours the POWs were evacuated to the USS Benevolence where they were tiraged into those who needed immediate medical attention and those who were ambulatory. In the matter of a few hours, these walking skeletons were registered, checked, cleaned, deloused, shaved, clothed, and fed whatever they wanted and allowed to eat as much as they wanted under the watchful eyes of medics. Toward midnight, the healthier men were transported to the USS Reeves to bunk down until it was determined where to send them for their journey home.

Marine and Navy rescuers also quickly made their way to the nearby Shinagawa “hospital.” What they found was “an indescribable hellhole of filth, disease, and death.” One doctor, 1/Lt. Hisakichi Tokuda, at this "hospital" was infamous for his fascination with human experimentation and general medical incompetence. At the War Crimes Trial he was prosecuted for injecting soybean milk into one Dutch, one British, one Italian, and two American POWs resulting in their death. He was sentenced to life to death at the Yokohama War Crimes Trials in February 1948. On September 3, 1951, General Matthew Ridgeway, who was serving as head of UN Forces in Korea and Military Governor of Japan, commuted Tokuda's sentence to life. It is likely he was released in 1958.

Today, the Heiwajima Motor Boat Racing venue is located at the site of this former POW camp. This monopoly gambling franchise was created by unindicted Class-A war criminal and black marketeer Ryohei Sasakawa. It now is managed by the Nippon Foundation which is part of the Sasakawa family of foundations and enterprises. The Sasakawa family and organization is the major funder of Japan programs around the world, especially exchange and think tank programs in Washington. The organization is a major funder of off-budget projects of the Japanese government.

There is a small memorial at the venue--Heiwajima Kannon--featuring a statue of Kannon (the goddess of mercy) and a signboard in Japanese with some euphemistic references to the brutal history of this spot. Among the information not provided by the signboard are: 1) how many POWs perished here, 2) how many POWs built the original island, and 3) that wartime Prime Minister Hideki Tojo was briefly held here when he was first arrested as a war criminal.
On August 30th, General Douglas MacArthur set foot in Japan at Atsugi Airfield aboard Bataan II.
The next day, down the road in Totsuka, the Army found American Etta Jones and 18 Australian nurses. Etta was the first Caucasian female taken prisoner by a foreign enemy on the North American continent since the War of 1812. She was captured in June 1942 when Japanese troops invaded Attu Island in the Aleutians. The Japanese forced her to witness her husband beheaded. She and the 42 Aleuts living on Attu were taken as POWs to Japan. Nearly half of them died as POWs in Otaru, Hokkaido — many from tuberculosis, malnutrition and starvation.
For more on the liberation see HERE.