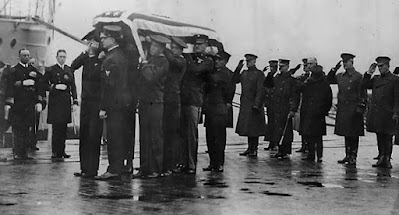 For the first time in nearly 100 years, and as part of the Tomb of the Unknown Soldier Centennial Commemoration, the public will be able to walk on the Tomb of the Unknown Soldier Plaza and lay flowers in front of the Tomb on Nov. 9 and 10, 2021, 9 a.m. to 4 p.m.
On Veterans Day the public is invited to observe a joint full honors procession, meant to replicate elements of the World War I Unknown Soldier’s 1921 funeral procession followed by a flyover with aircraft from all the armed services branches.
Event Participation: What to Know.       Army Commemoration Website.
Registration is required at Eventbrite.com: https://anctomb100.eventbrite.com/
Of the more than 72,000 American service men and women are still missing from World War II, 65 percent or more than 47,000 are missing in the Indo-Pacific. Most are presumed lost at sea, many dying as POWs in Japanese hellships.
at 6:01 PM