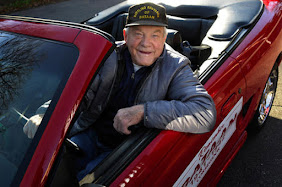 A lifelong Connecticut resident, Dan fought as an airman, infantryman, and Marine in the historic 1941-42 battle for Bataan and siege of Corregidor. He was a POW of Japan for over three years where he was forced to construct by hand with 300 other POWs the airfield on Palawan Island for the Imperial Japanese Army that is today the Antonio Bautista Air Base, which is instrumental in the U.S.-Philippines Enhanced Defense Cooperation Agreement.

This airfield was the site of the infamous Palawan massacre. Dan had been shipped to Japan in 1944 to work in copper mines owned by companies known today as JX Nippon Mining & Metals and Furukawa Company before his fellow POWs on the island were set afire and murdered. In 2003, he helped fund and dedicate a new new marker on the mass grave of 123 men massacred on Palawan who he had worked alongside building the airfield. Their remains were returned to the United States after the war and buried in a common grave at the Jefferson Barracks National Cemetery in St. Louis. The program will be livestreamed HERE.

A video of the event will be found HERE.

Tax-deductible Donations to the ADBC-MS HERE.
at 6:53 PM