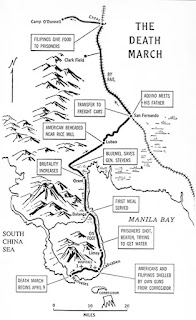 Eighty Years Ago The horrors of today's war in Ukraine recall some of the atrocities committed by the Japanese empire during World War II.

by Mindy Kotler, proprietor the American POWs of Japan blog

Published April 9, 2022 in the National Interest

Pvt. Lester Tenney of Illinois’ 192nd Tank Battalion felt lucky. The Japanese officer’s sword missed his head and neck. Although he was left with a large gash on his shoulder, medics could quickly sew it up and he was soon back on the dusty road up the Bataan Peninsula. To fall behind or to falter guaranteed death. Like the civilians of Ukraine’s besieged cities, the surrendered soldiers and civilians on the Bataan Death March were defenseless and at the barbarous mercy of the invaders. It began eighty years ago today, on April 9, 1942.

The Bataan Death March is remembered as one of the greatest war crimes of World War II. The Japanese commanders involved were prosecuted for crimes against humanity or for violating the international laws of war and executed. So seminal in American history were these events that Bataan is part of the American lexicon as a metaphor for a tortuous undertaking. It is why National Former Prisoner of War (POW) Recognition Day is held every April 9th.

It is also one of the few Japanese war crimes for which the Japanese government has made a specific effort to atone. In 2009, the Japanese ambassador to the United States Ichiro Fujisaki, prompted by Tenney, traveled to the last convention of the American POWs of Japan and offered his country’s apology.  The ambassador also arranged a visitation program to Japan for surviving POWs.

“We extend a heartfelt apology for our country having caused tremendous damage and suffering to many people, including prisoners of war, those who have undergone tragic experiences in the Bataan Peninsula, Corregidor Island, in the Philippines, and other places,” he told the men and their families.

This apology, which never appeared on the Japanese Ministry of Foreign Affairs website, was repeated to four visiting delegations of American POWs by three Japanese Foreign Ministers. Japan’s current prime minister, Fumio Kishida, when serving as foreign minister, met with the 2013 POW group. Among them were two Bataan Death March survivors, including a Native American survivor, as well as two widows of Death March survivors. To his credit, he participated in the first principle of reconciliation, which is to hear their story.

The full story is that the Death March came after four months of combat starting when Japan attacked the Philippines within hours of bombing Pearl Harbor on December 7, 1941. A three-month siege of the Bataan Peninsula accompanied by a starvation diet, air and artillery bombardment, and disease had taken their toll. The Allies’ Europe-first policy combined with Japan’s control of the sea and air ensured that neither resupply nor reinforcement of the Philippines would come.

In the early morning hours of April 9, 1942, the newly appointed commanding general of Am-Fil forces on the Bataan Peninsula, Maj. Gen. Edward P. King Jr., realized that his troops faced slaughter if they continued to fight. He decided the rational course was to order the men and women under his command—against Gen. Douglas MacArthur’s orders—to surrender. Thus, 78,000 troops (66,000 Filipinos and 12,000 Americans) were taken captive by Imperial Japan.  Among them there were dozens of European civilians—Czechs, Estonians, Latvians, Norwegians, Germans, Finns, Dutch, and British—who had volunteered to join the fight. In addition, there were at least 10,000 in two field hospitals in Bataan. It is the largest contingent of U.S. soldiers ever to surrender.

Focused on saving his exhausted and ailing troops, King could not imagine the horrors that surrender would hold. On the same day as the surrender, the Japanese put the survivors on what has become known as the Bataan Death March. It is estimated that perhaps 2,000 either swam the three shark-infested, mined miles to the fortress island of Corregidor (No one on Corregidor was on the Death March) or disappeared into the jungle. Those who made it to Corregidor became immediately members of the 4th Marines fighting shore defense. Corregidor and the associated three island fortresses surrendered on May 6th.

The Bataan Death March was a poorly commanded effort to move the surrendered troops and civilians on the peninsula to a POW camp one hundred miles north. The result was that the Japanese neglected the sick and killed the wounded; denied the POWs food, water, and medical care; and abused, robbed, and tortured them. Many men stamped into the road by tanks or shot trying to drink from a stream remain missing.

For most, the first leg of the Death March was sixty-five miles from the port of Mariveles at the southern tip of the Bataan Peninsula up the East Road to a train terminal at San Fernando. Others arrived at the East Road at the village of Pilar after a sixteen-mile trek from Bagac on the west side of Bataan. It took an average of five days in the tropical heat for the terrorized, sick, and starving men to reach the station. There they were stuffed standing one hundred at a time into small, unventilated boxcars for a twenty-four-mile ride north to the town of Capas. Many died in these rolling ovens.

The survivors were forced to walk another five miles to Camp O'Donnell, an unfinished Philippine Army training camp. With only two spigots of water and no sanitation, the camp was quickly compared with the Confederacy's Andersonville prison camp. Hundreds died of disease, starvation, dehydration, and despair. Most of the deaths from the Death March happened here or at its successor camp, Cabanatuan.

Survivors of the Bataan Death March endured three-and-a-half years of death camps, brutal labor, and unimaginable indignities and injury. Many were taken to Japan aboard hellships to be slave laborers for Japanese companies in Formosa, Japan, Manchuria, and Korea.  Again they were denied food, medical care, clothes, and adequate housing.

Tenney ended up in Mitsui’s Omuta coal mine near Nagasaki. The working conditions were so severe that POWs traded their meager meals to have their arm or leg broken so that they would get a short reprieve from going back underground. Today, the mine is a UNESCO World Industrial Heritage site.

As horrifying as the Bataan Death March was, it was not an exception in Japan’s war. Other death marches were imposed upon American and Allied POWs throughout the Pacific.Torture and executions were commonplace. Death from overwork and malnutrition were the norm. Abuse was systematic.

How a country treats the defenseless and dependent is a measure of their citizens’ values. How the victims endure the neglect and damage inflicted upon them also reflects values. Like the men and women on Bataan, there is much to admire in the Ukrainians. They persist and endure.

As President Franklin D. Roosevelt said in August 1943, when the outcome of World War II was still uncertain, “The story of the fighting on Bataan and Corregidor—and, indeed, everywhere in the Philippines—will be remembered so long as men continue to respect bravery, and devotion, and determination.” This still holds true eighty years later.