The Czechs on Bataan 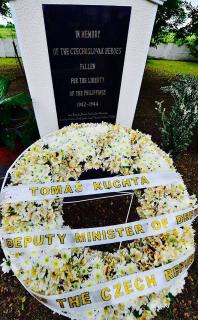 – Article submitted by the Embassy of the Czech Republic

In line with the Day of the Valor or Araw ng Kagitingan celebrated today, programs to honor the heroic defense and valiant fight of the men and women of war are conducted. Aside from the Filipino and American soldiers, the Embassy of the Czech Republic also pays tribute to the Czechoslovak nationals who volunteered to defend the Philippines during the Second World War.

This story of the Czechoslovak defenders of Bataan is unique, though unknown. Since they were nationals of Czechoslovakia, which at that time was under Nazi protectorate, the Japanese forces had guaranteed their safety. Nonetheless, they still chose to offer their service and therefore, were considered as the only nationals to serve in the US Army Forces in the Far East (USAFFE) from countries occupied by the Nazi forces. In the words of Karel Aster, one of the Czech defenders of Bataan who passed in 2019, “Fighting for the Philippines at that time was like fighting for the liberty of Czechoslovakia.”

This period in the history of the Czech Republic and the Philippines leaves an indelible mark on Czech-Philippine relations. The courageous decision to fight for the liberty of a country that was not their own was captured not only in the shrine dedicated to them in Capas, Tarlac but also in the headstones and walls of the missing at the Manila American Cemetery and Memorial.

With more than 16,000 graves of military dead and approximately 36,000 names on the Walls of the Missing, the Manila American Cemetery and Memorial is the largest of its kind. In the vastness of its lands, measuring 152 acres, lie the immense stories of the Second World War. These stories are the subject of an educational tour hosted by the erudite guide, Vicente Paolo Lim IV.

During the visit of the members of the Embassy of the Czech Republic led by Ambassador Jana Šedivá, Mr. Lim introduced that the stronghold in Bataan from Jan. 7, 1942 to April 9, 1942 delayed the Japanese forces from advancing in the Pacific, eventually leading to Allies’ victory in World War II.

He also shared the importance of the role played by the Czechoslovak volunteers during the war. For one, they were in charge of supply and logistics, and included in their responsibilities was to retrieve the rice-milling equipment in Abucay line, exposing them to 36-hour enemy fire. This rice-mill equipment was significant in increasing the ration of food for the US forces. Thus, Jan Bžoch, Pavel (Paul) Fuchs, Leo Hermann, Fred Lenk, Otto Hirsch and Arnošt Morávek earned the American Medal of Freedom – the highest civilian distinction of the US.

Among those who volunteered, two of the graves are found at the Manila American Cemetery: Leo Hermann and Pavel (Paul) Fuchs. Each of them carried unique experiences during the war. Based on archival records, Hermann died as a prisoner of war in the Japanese concentration camp, Fukuoka, on April 2, 1945. Meanwhile, Fuchs passed in Camp O’Donnell on May 25, 1942 due to dysentery. Aside from the Czechoslovaks who volunteered for the Allied forces during the war, another grave of an American soldier of Czech origin was visited. Charles Stejskal was assigned as an infantry replacement to M Company, 172nd Infantry 43rd Infantry Division who participated in the Lingayen Gulf invasion and other subsequent operations. He was killed on Jan. 24, 1945 near the town of Rosario in Northern Luzon.

The Czechoslovak volunteers experienced various horrors in the war – from encounters with artillery fire; the infamous death march; prisoner of war camps and the hell ships where lives were lost, and in all these stories the common theme of horror and desperation is evident.

Mr. Lim is the great-grandson of a Philippine war hero, Brigadier General Vicente Lim, who heroically laid down his life for his country. For him, the dedication to tell the stories of World War II is a personal mission in order to serve as a reminder of the havoc of wars.

The visit to the cemetery was also very personal for Ambassador Šedivá. With the ongoing war in Europe when Ukraine is facing an unprovoked invasion from Russia, it is timely to remember the history and lessons of previous World Wars.

“It is important that we recall the lessons of the past – that there are no victors in wars, and civilians, especially women and children, remain to be at risk the most. While the war seems far from our door, we will all be affected in one way or another, regardless of where we are,” remarked Ambassador Šedivá.

The Czech Republic, as one of the countries that have previously been occupied by foreign invaders, remains steadfast in its commitment to remember the past and to stand for those whose liberty is challenged. In celebration of the Day of the Valor or Araw ng Kagitingan, the Embassy of the Czech Republic recalls the past and remembers those who laid down their lives for freedom.

And, in the continuing fight and worsening situation in Ukraine, it encourages the public to continue to call on all parties of the conflict to fully respect international law, and to avoid repeating the horrors of the past.