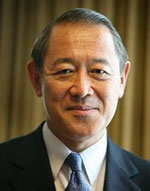 On May 30, 2009, at the last convention of the American Defenders of Bataan and Corregidor in San Antonio, Texas, Japan's Ambassador to the United States Ichiro Fujisaki courageously delivered an official Japanese government apology to the American POWs of Japan.

There is no known official transcript of the apology in either English or Japanese. The Japanese Embassy nor Japan's Foriegn Ministry has never published a transcript or publicized that this apology was given. Thus, there is no way of knowing what apology words the Japanese government used in the apology. There are a number of significant variations.

As the apology is a variation of the 1995 Murayama Statement of apology for the war, one may assume that the Japanese is similar: "During a certain period in the not too distant past, Japan, following a mistaken national policy, advanced along the road to war, only to ensnare the Japanese people in a fateful crisis, and, through its colonial rule and aggression, caused tremendous damage and suffering to the people of many countries, particularly to those of Asian nations. In the hope that no such mistake be made in the future, I regard, in a spirit of humility, these irrefutable facts of history, and express here once again my feelings of deep remorse and state my heartfelt apology. Allow me also to express my feelings of profound mourning for all victims, both at home and abroad, of that history."

The Embassy's newsletter "Japan Now" (January 12, 2010) also never mentions this historic apology. Indeed, in looking back upon the year, Amb. Fujisaki does not mention his apology among the 'three firsts' in the Japan-U.S. relations in 2009."

Below is a transcription of the Ambassador's remarks taken off a video produced by the TV station, San Antonio Express (no longer on their site, but featured among the four videos at the top of this blog).


Ladies and gentlemen, I thank you very much. I am very grateful, for the very kind invitation I have received. It is a great honor to participate in your final convention.[Cut]

Today, I would like to convey to you the position of the government of Japan on this issue. As former Prime Ministers of Japan have repeatedly stated, the Japanese people should bear in mind that we must look into the past and to learn from the lessons of history. We extend a heartfelt apology for our country having caused tremendous damage and suffering to many people, including prisoners of wars, those who have undergone tragic experiences in the Bataan Peninsula, Corregidor Island, in the Philippines, and other places.

Ladies and gentlemen, taking this opportunity, I would like to express my deepest condolences to all those who have lost their lives in the war, and after the war, and their family members. As for the Peace Program, as such Dr. Tenney referred, I have told him that I cannot make a definite statement at this junction, if we can expand this program. However, I can convey to you that relevant bureau in the government of Japan is working seriously and sincerely on this matter.[Cut]

Today, Japan and United States are the closest friends, best allies. But, we should always keep in our mind that this good relations is based on our past experiences and efforts. Ladies and gentlemen, we are committed to carry on the torch of our future gen-to our future generations of this excellent and irreplaceable friendship and relations. I thank you very much for this occasion.
at 4:48 PM