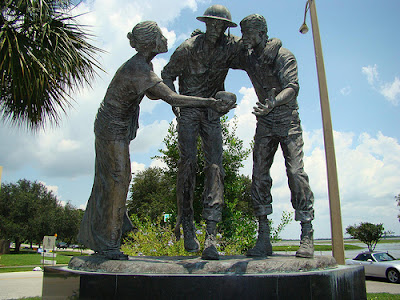 The Bataan-Corregidor Memorial dedicated on May 20, 1995 was a project of the Filipino-American community with the help of the City of Kissimmee, Florida. It was the first of its kind built in the United States.  Kissimmee is 18 miles southwest of Orlando, with Walt Disney World a mere 6 miles to the west. The memorial features a life-size bronze statue of a Death March scene involving an American soldier, a Filipino soldier and Filipino woman. For more photos of the memorial park see HERE.

Bill Posey represents Florida's 15th district, which includes Kissimmee. Congressman Posey, as of July 19, 2011, has not yet signed on to co-sponsor H. Res. 333 that honors the survivors of the Bataan Death March..
at 3:45 PM