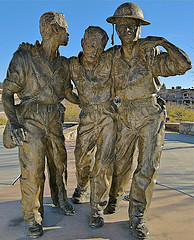 Las Cruces artist Kelly Hester designed and sculpted the larger-than-life bronze statue depicting the struggle of those on the Death March. Two men try to hold up their buddy and move him forward. If they did not succeed, he would be shot, bayoneted, or beheaded—or all those things. Footprints are imbedded in the concrete in front of them... footprints made by boots as well as by bare feet. These footprints were made by those who had survived the March and their ordeal as POWs of Japan.

The Battle of Bataan and it bitter aftermath is deeply rooted in the state of New Mexico. Of the 12,000 Americans on the Bataan Death March, 1,800 were from the 200th and 515th Coast Artillery of the New Mexico National Guard. They came from nearly 300 New Mexican communities, and some 300 came from southwest New Mexico alone, where Las Cruces is located.

In addition to the national memorial to the Bataan Death March, the Las Cruces area has also hosted, since 1989, the annual Bataan Memorial Death March. The March takes place every March at the White Sands Missile Range in New Mexico. Over 5,000 people from all over the U.S. and the world participate. Service members march in uniform.

The local congressman is Republican Steve Pearce, an Air Force veteran and Tea Party Caucus member who has established a Veterans Advisory Council for his district. Despite this commitment to New Mexico’s veterans, Congressman Pearce has not yet signed on as a co-sponsor of H. Res. 333, honoring those who were POWs of Japan, many of whom were from New Mexico. (August 13, 2011)