Today, Mitsui family members and corporate officials refuse to meet with the former slave laborers that kept their business profitable during World War II. This was not always the case.

During the War, Mitsui, Japan's oldest and largest trading company, transported and used the greatest number of Allied POWs as slave laborers. Their mines, factories, and docks were considered among the most hellish for non-Japanese. At the postwar war crimes tribunals, former POWs identified many Mitsui employees as sadists, torturers, and murderers.

In the War’s immediate aftermath, hoping to temper these POWs' feelings, Mitsui’s leaders appear to have held a series of "parties" for senior officers from their POW camps. The thoughts of the attendees, unfortunately, are not readily available. Holocaust scholars I have talked with cannot recall any similar farewells between German corporate officials and their recently-released slave laborers. 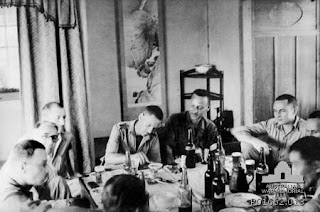 As this photo in the Australian War Memorial archives shows, Baron Takaharu MITSUI is hosting a party in early September 1945 with Allied officers who had been held in Fukuoka Camp #17, a POW camp at Omuta located at the Mitsui Kozan Miike Kogyo-Sho coal mine and Mitsui Zinc Foundry.

Although the mine is long closed--it was the site in 1960 of Japan's worst and most violent labor dispute--Mitsui facilities  remain at the location and are part of Mitsui's Nippon Coke & Engineering Co. Ltd., one of the successors of Mitsui Mining.  The Japanese government has recently submitted an application to UNESCO to designate this Miike mine as a World  Industrial Heritage Site. 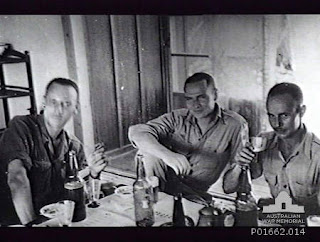 Baron MITSUI, a Dartmouth (1915) graduate, was the owner of the coal mine where these POWs slaved. He took a peculiar interest in their existence at his largest mine. Many former POWs remember seeing the Baron visit both their camp and the mine in his open touring car. He even attended a burlesque show the POWs were allowed to stage in the fall of 1944.


He, thus, knew that the mine was so dangerous that it had been shut down for years and that the injury rate among the POWs was very high. He saw the emaciated POWs and he knew that food, heat, medicine, and clothing were withheld. And he did nothing.

Prior to this "party," up north in Hokkaido, the mine managers of the Mitsui mine at the Hakodate #4, Nishi-Ashibetsu POW camp held their own "celebration." On 20 August 1945, three days after they informed their slave laborers of Japan's surrender, the officials of the Mitsui Mining Company invited POW commander, Colonel William Ashurst and several other officers to a dinner at the local Mitsui Company Club House. The picture BELOW is of some of the attendees. The following POWs, nearly all North China Marines or Wake Island Marines, attended: 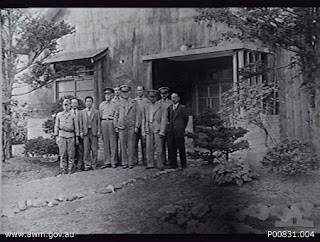