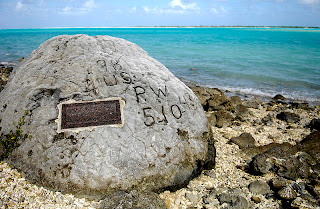 In the late afternoon of October 7, 1943, 98 civilian American POWs were lined up and seated along the ditch facing the sea. They were blindfolded with their hands and feet bound. Three platoons of Japanese troops then mowed them down with machine gun and rifle fire.

The Americans, all civilian contractors for Morrison-Knudson captured after the historic defense of Wake Island in December 1941, were dumped into the ditch and covered with coral sand. The following day, a report from an enlisted man that he saw one of the prisoners escape during the confusion of the massacre prompted the disinterment of the bodies. The corpses were dug up and counted, then hastily reburied.

The sailor had been correct; one American was missing. That man, whose identity has not been discovered, was re-captured and beheaded personally by the island's commander, Admiral Sakaibara, three weeks later.

On a large coral rock near where the victims were buried is carved 98 US PW 5-10-43 [pictured above]. It is believed that the lone escapee of the massacre returned to the site to carve this lonely memorial before he was recaptured.

The 98 men were what was left of the 1,150 civilian contractors on Wake Island employed by the Morrison-Knudsen Company, to build an airfield, seaplane base, and submarine base and to dredge a channel into the lagoon to allow access for U.S. submarines. Combat, disease, and shipment to Japan and China for slave labor had reduced the group to those unlucky few.  They toiled, for the Japanese, in violation of the Geneva Convention at various military projects on all three islands of the atoll.

The Wake Island Massacre was not the worst nor the most infamous of Imperial Japan's military's tendency to favor the expediency of a mass killing over a humane plan for those suddenly put into their care. Nanking and Manila may be the most well-known for the number of non-combatants killed, but Palawan (which I will soon write about), Bangka Island, and Sandakan have well-documented histories.

On the beach at Bangka in 1942, Japanese soldiers machine gunned 22 shipwrecked Australian military nurses. There was only one survivor, Vivian Bullwinkle. The Sandakan Death Marches were a series of forced marches in Borneo from Sandakan to Ranau which resulted in the deaths of more than 3,600 Indonesian civilian slave laborers and 2,400 Allied prisoners of war. The 38 prisoners left alive at Ranau were shot by their guards, possibly 12 days after the War's end.

Good Sources:
A Magnificent Fight: Marines in the Battle for Wake Island by Robert J. Cressman