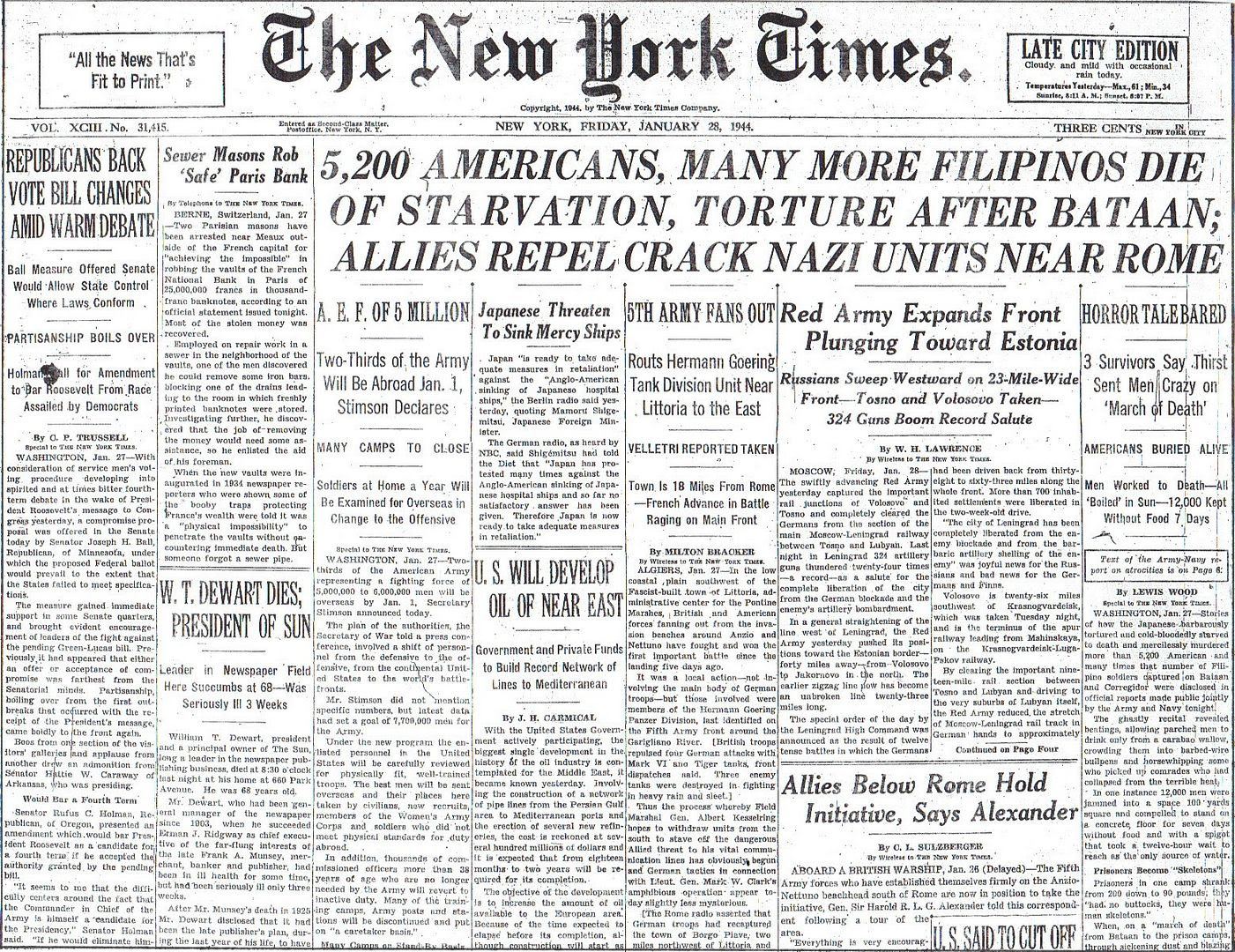 Seventy-one years ago today, the headlines across the United States screamed of the brutality of Imperial Japan. Prisoners, civilians, women, children had been tortured, starved, and slaughtered in the Philippines. The rumors of unimaginable savagery toward its captive peoples had all proved true.

On January 28, 1944, the world first learned about the Bataan Death March (April 1942) and the horrors endured by the American and Filipino POWs of Japan. Invading Japanese forces showed no mercy, allowing their prisoners to die by the thousands from savagery, starvation, and disease.

Newspapers and newsreels told the stories of three American escapees from a Japanese POW camp in the Philippines who had survived the Death March the Davao Prison Camp. Never before had the public been allowed to hear of the extent of Japanese atrocities and the inhumanity of their regime. Washington had kept the story from the public, fearing that the Japanese would use it as an excuse to end efforts to aid the POWs or worse.

Congressman and editors cursed Churchill and Roosevelt for advocating a Europe First strategy that put aside the war in Asia in favor of focusing on Hitler in the West. The result was the smashing of American air and sea power in Asia, the largest defeat in US military history, and the unfathomable deaths of thousands of Americans both military and civilian in the Pacific.

The truth aroused such fury in the American public that the government’s Europe First policy was imperiled. On January 29th at the Brooklyn Navy Yard, Margaret Truman, Missouri senator Harry Truman’s daughter, expressed the feelings of her fellow Americans when she said as she christened the battleship USS Missouri, “May this great ship be an avenger to the barbarians who wantonly slaughtered the heroes of Bataan.” *

More war bonds were sold in January and February 1944 than in any period of the war. The graphic description of the Death March and the POW camps was serialized by the Chicago Tribune and made into a book. The hero of the story, Texas native and US Army Air Corps William Dyess who organized the escape, unfortunately died December 1943 in a plane crash barely a month before the public release of his story.

The public learned that American and Filipino forces fought from an untenable position until formally surrendering to the Japanese on April 9. The Japanese immediately began to march some 76,000 prisoners (12,000 Americans, the remainder Filipinos) northward into captivity along a 65-mile route of death.

Japanese butchery, disease, exposure to the blazing sun, lack of food, and lack of water took the lives of approximately 5,200 Americans and Filipinos along the way. Many prisoners were bayoneted, shot, beheaded or just left to die on the side of the road. "A Japanese soldier took my canteen, gave the water to a horse, and threw the canteen away," reported one escapee. "The stronger were not permitted to help the weaker. We then would hear shots behind us." The Japanese forced the prisoners to sit for hours in the hot sun without water. "Many of us went crazy and several died."

The ordeal lasted five days for some and up to twelve days for others. Although the Japanese were unprepared for the large number of prisoners in their care, the root of the brutality lay in the Japanese attitude that a soldier should die before surrender. A warrior's surrender meant the forfeiture of all rights to treatment as a human being.

This was the "first murder" Captain William Dyess said he witnessed:


"The victim, an air force captain, was being searched by a three-star private. Standing by was a Jap commissioned officer, hand on sword hilt. These men were nothing like the toothy, bespectacled runts whose photographs are familiar to most newspaper readers. They were cruel of face, stalwart, and tall.

'The private a little squirt, was going through the captain's pockets. All at once he stopped and sucked in his breath with a hissing sound. He had found some Jap yen.' 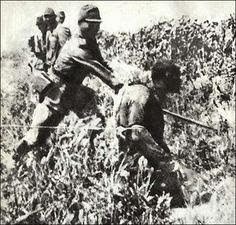 'He held these out, ducking his head and sucking in his breath to attract notice. The big Jap looked at the money. Without a word he grabbed the captain by the shoulder and shoved him down to his knees. He pulled the sword out of the scabbard and raised it high over his head, holding it with both hands. The private skipped to one side.'

'Before we could grasp what was happening, the black-faced giant had swung his sword. I remember how the sun flashed on it. There was a swish and a kind of chopping thud, like a cleaver going through beef'.

'The captain's head seemed to jump off his 'shoulders. It hit the ground in front of him and went rolling crazily from side to side between the lines of prisoners.'

'The body fell forward. I have seen wounds, but never such a gush of. blood as this. The heart continued to pump for a few seconds and at each beat there was another great spurt of blood. The white dust around our feet was turned into crimson mud. I saw the hands were opening and closing spasmodically. Then I looked away.'

'When I looked again the big Jap had put up his sword and was strolling off. The runt who had found the yen was putting them into his pocket. He helped himself to the captain's possessions.'

You can read here THE DYESS STORY: The Eye-Witness Account of the DEATH MARCH FROM BATAAN and the Narrative of Experiences in Japanese Prison Camps and of Eventual Escape

Sign the petition to award Dyess the Medal of Honor

*A Pentagon history of the escape: Part I and Part II
at 6:14 PM