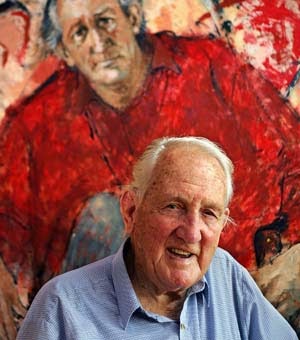 He was hardly more than a boy then- a prisoner-of-war and slave of the Japanese in his early 20s on the Burma-Thai railway.

But Tom Uren would take many more hits as his long, often controversial life wore on, and he rolled with them all and refused to lie down.

Today, aged 91, with most of his opponents fallen away - and a lot of them forgiven by him, including the Japanese - he will receive the highest honour his nation can bestow on a civilian: Companion in the General Division of the Order of Australia.

Others to be so honoured today include former Howard government foreign affairs minister Alexander Downer, astrophysicist and joint Nobel prize winner Professor Brian Schmidt of the Australian National University's Mount Stromlo Observatory, and the director of the Australian Centre for Christianity and Culture in Canberra, the Reverend Professor James Mitchell Haire.


Australia mourns the passing of the Honourable Tom Uren AC. He was a prisoner of war, a parliamentarian, a minister, a deputy leader of his party and served our country throughout his adult life.He was an aspiring boxer and outstanding athlete who joined the army at the age of 20 and deployed to Timor.He spent his 21st birthday – and the following three – as a prisoner of war. He suffered the brutality of the Burma-Thai Railway and he witnessed from afar the atomic bomb on Nagasaki.Despite these experiences, he rejected hatred. -- Prime Minister Tony Abbott

Mr Uren's award states it is for ''eminent service to the community, particularly through contributions to the welfare of veterans, improved medical education in Vietnam and the preservation of sites of heritage and environmental significance".

All true, but it's an inadequate summation of the life of the Balmain-born man who, impoverished, left school at 13 years and seven months.

He fought for the heavyweight boxing championship of Australia at 19 (and lost), marched into the hell of the Burma-Thai railway at 21, served the Labor Party as member for the Sydney electorate of Reid for 32 years, became his party's deputy leader and a cabinet minister in the Whitlam government and later found himself consigned to the junior ministry for four years in the Hawke government.

As a whip-thin prisoner shipped from Thailand to Japan to labour in a copper smelter, he watched the sky discolour when the Fat Man atomic bomb was dropped on Nagasaki. [He was at Omuta, Fukuoka 17 as a slave laborer for Mitsui Mining.]

It stopped the war and freed him, but he became one of Australia's leading anti-nuclear campaigners. The Japanese, he insists, were as much victims of militarism and fascism as anyone else.

Long a man of the Left, Mr Uren's early excursions into the peace movement were so passionate that ASIO believed he was taking his instructions from the Soviets. When newspapers published the libel, he sued and eventually won enough for two holiday homes, which he took delight in calling the ''Fairfax Retreat '' in the bush and the ''Packer Lodge'' on the New South Wales south coast.

His insistence in marching against the Vietnam War earned him several stretches in jails, including Sydney's Long Bay and Brisbane's Boggo Road. Mr Uren was appalled by the dehumanising effect of the old jails, and used his influence to get at least one of his fellow prisoners a job in Canberra.

''So many people are crook on their fellows, but I just look for the love in people,'' he says.

Often Mr Uren found himself talking, he says ''to two-and-a-half dogs". He was one of the early proponents of self-determination for the East Timorese, but no one seemed interested. He simply kept at it until it became mainstream.

The defining period of his life was the Burma-Thai railway. Taken prisoner on Timor aged 20, he marched into his first prison camp on the railway aged 21.

Always a big, strong man, he became known for his willingness to put his body between furious Japanese guards and his comrades, figuring he could take the beating that might kill a mate weakened by hunger, disease and slaving.

It was the influence of the camp commander, Lieutenant-Colonel Edward ''Weary'' Dunlop, that stayed with him. Colonel Dunlop, a surgeon, taxed fellow officers to build a small bank to buy medical supplies and food, saving the lives of many hundreds of men, and he ensured that the strong looked after the weak, the young looked after the old and the relatively healthy cared for the sick.

It was, Mr Uren says, collectivism - a principle he adopted for life and which during the Cold War found him branded a communist, though he never was.

He never forgot his fellow POW survivors, and fought a battle over 23 years to grant them extra benefits, arguing that they died younger and suffered greater illness than other returned servicemen. In 2011, Prime Minister Julia Gillard announced that all remaining POWs would receive an extra $500 a fortnight.

Of the 22,000 Australian prisoners of the Japanese, only some 400 are alive now, but Mr Uren said Ms Gillard's action displayed compassion and justice, which he valued above all else.

And his elevation to Companion of the Order of Australia?


''I just want to thank my fellow Australians for their support, their warmth and their love in my evergreen years,'' he says.

Reprinted from The Sydney Morning Herald by Tony Wright
at 7:09 PM