The Filipino in the eyes of the world


by James M. Scott, author of Rampage: MacArthur, Yamashita and the Battle of Manila.

MANILA, Philippines — Few cities and cultures have been as dramatically shaped by war as Manila and the Philippines — the effects of which still echo through life today with the struggle of poverty, violence, and questions over national identity and remembrance.

But it wasn’t always that way.

Prior to the outbreak of World War II, the Philippine capital, filled with neoclassical architecture and spacious parks, was known as the Pearl of the Orient, the star of steamship ads and tourism brochures.

The Japanese so mismanaged the Philippine economy that it triggered widespread starvation and the unraveling of the Catholic nation’s social fabric.

Desperate parents, meanwhile, abandoned their children to orphanages or even sold them while loving wives sold themselves.

“Morality cowered before the relentless onslaught of economic forces that the war had marshaled and unleashed,” observed prominent historian Teodoro Agoncillo.

The late journalist Carmen Guerrero Nakpil echoed him: “We became a race of spies, thieves, saboteurs, informers and looters, callous and miserly.”

The liberation of Manila, which most had hoped would at long last bring an end to the years of fear and misery, instead only compounded the tragedy.

Japanese forces, rather than evacuate the city as America had expected, instead hunkered down inside government buildings, homes and hospitals — even the dugouts at Rizal Memorial Stadium.

In a battle fought building-by-building and even room-by-room, American troops had no choice but, in the words of one Army report, to “exterminate the enemy in place.” 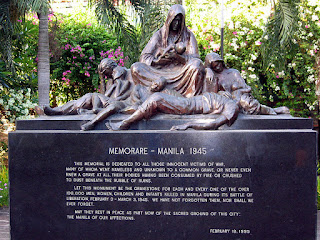 Amid this ferocious fighting, Japanese soldiers and marines committed some of the worst atrocities of World War II. Troops tossed babies in the air, skewering them on the steel tips of their bayonets.

Others raped scores of women, decapitated men by the hundreds, and torched entire neighborhoods, dynamiting the financial district and leveling the beautiful areas of Malate and Ermita.

When the guns finally fell silent on March 3, 1945 — 29 days after the American cavalry had rolled into the city – Manila was gone.

The battle to liberate the capital had flattened 613 city blocks, an area containing more than 11,000 homes, schools, churches and businesses.

“There seemed nothing left even to mourn,” journalist A.V. H. Hartendorp wrote at the time. Manila, he observed, “remained a name only.”

Beyond the structural losses, were the cultural ones.

The battle not only robbed Manila of its past and its heritage, but also its future. Amid the rubble and wreckage lay the lawmakers and doctors, teachers and inventors, moms and dads.

Forever lost was that priceless human capital, those men and women upon whose shoulders had once rested the future of a soon-to-be independent Philippines.

Absent any equivalent of the Marshall Plan — the $12 billion investment to rebuild a war-ravaged Europe — Filipinos were largely left to Band-Aid the city and themselves back together.

Manila, in many ways, has never recovered. Makati, with its wide boulevards and steel and glass high-rises, is a product of that pivotal battle. It was easier to simply start over than to rebuild.

But how does a nation heal the moral wounds that grew out of the war?

Were those years of desperation, which prompted brothers to turn on brothers, the seeds that blossomed into the social turmoil that currently ails the Philippines?

In an ironic reversal, Japan is one of the largest foreign investors and donors to the Philippines. But that cash has come with hidden costs that erode national morale and memory.

One such example was the removal last year of a statue on Roxas Boulevard dedicated to the euphemistic “comfort women,” victims of Japanese sexual assault.

The statue was not far from the old Bay View Hotel, where many Filipino women were held hostage and assaulted during the city’s liberation.

More recently, complaints by the Japanese Embassy prompted the removal of a second statue in San Pedro.

Why are the Japanese allowed to remember their war dead at the Yasukuni Shrine in Tokyo or the Peace Memorial Museum in Hiroshima but Filipinos cannot honor their wartime past with a simple statue?

National memory, it seems, has been traded for foreign investment.

But there are positive signs and fresh dialogue, too.

I was back in the Philippines in February for the launch of my book on the Battle of Manila, Rampage, a trip graciously sponsored by Memorare Manila, an amazing organization of survivors and descendants of that frightful fight.

During that time, I visited with students at area universities. I was amazed, too, at how many battle and even atrocity survivors attended. One woman brought me a copy of her diary. Another gifted me a poem she had written. Others showed me shrapnel scars.

It was powerful to witness generations come together to learn, share and remember this pivotal battle that was the fulcrum on which the history of Manila and its people forever changed.

Memorare hosted an essay contest afterward for students, asking what they learned of the battle and its legacy. The winning essay by Lea Athena Molina, a student at the University of Asia & the Pacific, captured it perfectly. “History teaches us that the past not only impacts the present, but also shapes the future.”
at 3:39 PM