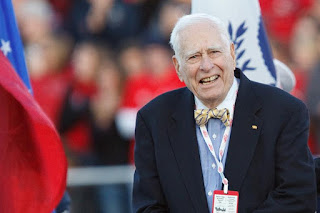 It is with great sadness that I report the passing of George Rogers (100) on August 18 in Lynchburg, Virginia. Liberty University reported his death on the 20th.

In 2015, at 95, he returned to Japan with nine other former POWs of Imperial Japan as a guest of the Japanese government as part of the 6th POW Friendship program that is organized by the American Defenders of Bataan and Corregidor Memorial Society of which he was a member. The Japanese initiated this important program of reconciliation only in 2010.

Rogers was a survivor of the Bataan Death March, the hellship Nissyo Maru, and Nippon Steel's steel mill at Yawata (now a UNESCO site). The multi-national Nippon Steel still exists and has never offered an apology for its use of POW slave labor. The Yawata steel mill complex was to be the target of the second atomic bomb, but on that day clouds covered the target and Nagasaki was instead selected.

GEORGE W. ROGERS, 100, resided in Lynchburg, Virginia. Mr. Rogers grew up in St Louis, Missouri and enlisted in the U.S. Army August 20, 1941, at Jefferson Barracks. He arrived on the Philippines October 1 and was assigned to 4th Chemical Company.

At first a clerk/typist at Fort McKinley, he was soon fighting in the defense of Bataan with L Company of the 31st Infantry Regiment (US) after Japan’s December 8 invasion. American forces were short of food, ammunition, and reinforcements throughout the campaign against the better equipped and trained Japanese. All forces on Bataan were surrendered on April 9, 1942, and most were forced on the infamous Bataan Death March.

Mr. Rogers endured the 65-mile trek up the Bataan Peninsula experiencing starvation, exhaustion, and beatings while witnessing merciless murders and torture. At the Camp O’Donnell where 1,500 Americans died over four months, he was a gravedigger. In August, he was moved to Cabanatuan #3 to farm rice and vegetables as well as to do duty building an airfield. On top of the beatings he received from the camp guards, Mr. Rogers and his fellow soldiers suffered through extreme pain in their feet and legs due primarily to dry or dry beriberi, a disease affecting the nerves and muscles. He also survived malaria and spent six months quarantined for what was thought to be amoebic dysentery.

On July 17, 1944, he was one of 1541 POWs taken to Japan via Formosa aboard the Hellship Nissyo Maru. During the 18-day trip with barely any food or clean drinking water, extreme heat, rampant illness — both physical and mental—he said, “I almost lost it, and then … I got a peace that came over me, and I just felt everything is going to be alright, just relax”; Rogers said. “As far as I’m concerned, God was at work again.” After arriving at the port of Moji, Japan, he was sent to POW Camp Fukuoka 3-B Yawata Japan Iron & Steel Co., Ltd. (Nippon Seitetsu; today’s multi-national Nippon Steel) to work in the Yawata steel mill for the rest of the war. Yawata featured Japan’s first blast furnace and was one the Empire’s most important armament makers. It was the primary target for the second atomic bomb. Cloud cover from aerial bombing on August 8, 1945, prevented this, but succeed in destroying key production facilities and ending prisoner work at the mill.

In July 2015, the site was given UNESCO World Industrial Heritage status, albeit without mention of the hundreds of POW slave laborers—American, British, Australian, Dutch, Portuguese, Jamaican, Indian, Malay, Chinese, and Arabians at the site. Japanese Prime Minister Shinzo Abe visited the facilities of Yawata Steel Works in July 2014, to encourage the UNESCO application.

On August 15, 1945, the camp commander announced that the war had ended and the guards disappeared. The camp was liberated on September 13th.

Mr. Rogers returned to the U.S. a gaunt, 6-foot-3, 85 pounds. Military doctors told him that it was unlikely that he would live past 45 or 50, keep his teeth, or have children. He retained his teeth, had five children, and displayed “a contagious joy.” Mr. Rogers used the G.I. Bill to obtain an accounting degree from St. Louis University.

Starting in 1973, Mr. Rogers was the CFO for Reverend Jerry Falwell (founder of the Moral Majority) overseeing his Old Time Gospel Hour television ministry and the Thomas Road Baptist Church in Lynchburg, Virginia. He became Liberty University’s vice president of finance and administration in 1999, through to Rev Falwell’s death in 2007.

In 2010, Liberty University named an award in Rogers' honor. The George Rogers Champion of Freedom Award is given annually to a man or woman who served in the United States Armed Forces and went above the call of duty, displaying extraordinary heroism while serving. The award is presented at a Flames football game during Liberty's Military Emphasis Week, held near Veterans Day. A bust of Rogers stands at the gate of Williams Stadium, the home of the Liberty Flames football team, as a tribute to Rogers for his sacrifices.

Mr. Rogers was married 67 year to Barbara,who passed away August 2015 shortly before he returned to Japan.

Mr. Rogers returned to Japan, as a guest of the Japanese government, in October 2015.