Events of interest this week to the POW of Japan Community 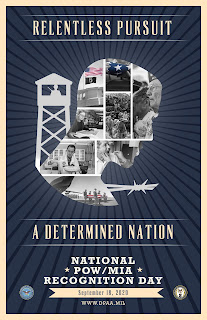 FRIDAY, SEPTEMBER 18TH is National POW/MIA Recognition Day
You can get this year's poster here free
There are still 47,177 missing from the War in the Pacific

WEDNESDAY, SEPTEMBER 16TH is Dwight D. Eisenhower Memorial Dedication
The Memorial, commissioned by Congress in 1999, honors the legacy of the World War II Supreme Allied Commander and nation's 34th President.
Eisenhower served as MacArthur's assistant in Washington and his advisor in the Philippines in the 1930s.
See here for more details
C-Span interview with Susan Eisenhower about her new book about her grandfather, How Ike Led.

THURSDAY, SEPTEMBER 17 is The Bataan Death March and The Sack of Cement Cross Seminar
The National Prisoner of War Museum at the Andersonville National Historic Site in Georgia is hosting a virtual event about the historic cross at Camp O'Donnell. The cross is exhibited at the Museum.
PANEL MEMBERS
Gia Wagner, Superintendent, National Prisoner of War Museum
Randy Olson (Moderator), Filmmaker, son of Col. John Olson
Chris Schaefer, Filmmaker/Historian
Fred Baldassarre, Historian
Dan Crowley, 98 yr old veteran of Bataan, former P.O.W.
John Eakin, Specialist, Identification of MIA/KIA remains
REGISTER HERE
WATCH AN OLSON VIDEO ABOUT CAMP O'DONNELL HERE ON FACEBOOK
FRIDAY-SATURDAY, SEPTEMBER 18-19  is the HOME ALIVE IN ‘45: PIVOTAL DECISIONS TO END THE WAR SYMPOSIUM
The Admiral Nimitz Foundation and National Museum of the Pacific War in Texas holds its 33rd Annual Symposium virtually. This year – the 75th anniversary of the end of WWII – the focus is on the strategies, events and impacts of the end of WWII in the Pacific. See and hear five experts in their fields speak and take your questions, a lively roundtable discussion with all five speakers, and stimulating breakouts that connect the dots between WWII and today's concerns.
Book discounts and an auction.
SPEAKERS
Marc Gallicchio - Unconditional Surrender: An Introduction to the End of WWII
Richard B. Frank – Downfall: The Stark Realities of the Atomic Bomb
Craig Symonds - The Legacy of Admiral Nimitz in Today’s Japan
Noriko Kawamura - A Conflicted Man: Emperor Hirohito and the End of the War with the United States
James Hornfischer - Revelation and Reckoning: Total War in the Pacific 1944-1945
Plus 3 concurrent breakouts:
Race in the Military Then and Now, led by Lt. General Vincent Stewart, USMC (Ret.)
The Pandemic—In Search of an Answer, led by Rob Havers, Ph.D.
The Evolving Roles of Women in the Military led by Major General Angela Salinas (Ret.)
REGISTER HERE
at 5:02 PM