Today is National POW/MIA Recognition Day. By law, 36 U.S. Code § 902, the POW/MIA Flag is to be displayed whenever the American flag is displayed on prominent Federal properties, such as the White House, to honor the more than 82,000 Americans who are listed as Prisoners of War (POW), Missing in Action (MIA), or otherwise unaccounted for from our nation's past wars and conflicts.

Display of the POW/MIA flag pursuant to this law must be "in a manner designed to ensure visibility to the public."

From August 1998 until June 2020, the POW/MIA flag has been displayed every day atop the White House. It is the only place on the White House grounds that is continually visible to the public. The flag was removed sometime in June 2020. White House spokesman Judd Deere told Reuters, “The president selected a site on the Southwest corner of the South Lawn for this prominent and sacred memorial, which is visible to all those who visit the White House, that features the POW/MIA flag.” This is not what the law implies. It must be visible to all.
On November 7, 2019, President Donald Trump signed into law a refinement to the 1998 law regarding the POW/MIA flag. This change required that the flag be continually flown on designated federal properties, such as the White House. S. 693, the “National POW/MIA Flag Act was introduced by Senator Elizabeth Warren and cosponsored by Senators Tom Cotton (R-AR), John Thune (R-SD), Kyrsten Sinema (D-AZ), Marco Rubio (R-FL), Maggie Hassan (D-NH), Jack Reed (D-RI), Pat Toomey (R-PA).
Prior to the signing of the Act, the POW/MIA flag was required only to be displayed by the Federal government on certain prominent federal properties only six days per year to include Armed Forces Day, Memorial Day, Flag Day, Independence Day, National POW/MIA Recognition Day, and Veterans Day.
POW/MIA FLAG IS MISSING FROM THE WHITE HOUSE TODAY
IN VIOLATION OF US LAW 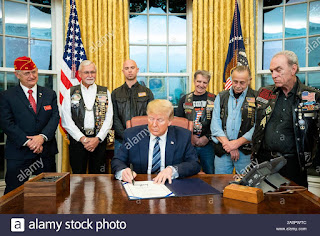