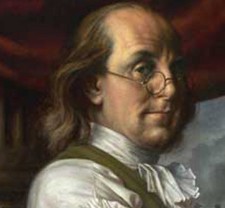 All Fishermen, all Cultivators of the Earth, and all Artizans, or manufacturers unarmed and inhabiting unfortified Towns, Villages or Places, who labour for the common Subsistence and Benefit of Mankind, and peaceably follow their respective Employments, shall be allowed to continue the same, and shall not be molested by the Armed Force of the Enemy.

With these poetic words, Benjamin Franklin proclaimed a radical ideal: that civilians—especially those whose labors help feed and clothe their neighbors—should be left alone by invading armies.

Franklin, who had been sent to France to negotiate an end to the Revolutionary War, tried to include this language in the Treaty of Paris, which formally ended the war with the British in 1783. But the British rejected Franklin’s humanitarian invention. Not until 1785, in a pact with Prussia, did Franklin and other American negotiators succeed in securing wartime protections for humble working people.

As he was waiting for the British decision in 1783, the elderly statesman was negotiating commercial treaties with Portugal and Denmark, which were never ratified. Yale researchers have now discovered that those deals also included the landmark language safeguarding civilians—a fact Franklin had kept secret. “Without telling [fellow negotiator John] Adams or Congress, he slipped in this article,” explains Ellen Cohn, editor of the Papers of Benjamin Franklin project at Yale. The project, cosponsored by the American Philosophical Society, aims to edit and publish all of Franklin’s writings; it was founded in 1954 and has so far produced 39 of a projected 47 volumes.

Because Franklin told no one about his clandestine efforts, and made no written record of them, Cohn turned to the Danish National Archives for an account of his “deft and complex negotiating strategies.” She tells the story in Volume 40 of Franklin’s papers, which will be published in December.

Eventually, the Geneva Conventions enshrined civilian protections in international law. It was one of Franklin’s dearest wishes. “He wanted this to be universal,” Cohn says.

He once wrote, in a letter to a friend: “I should be happy if I could see before I die, the proposed Improvement of the Law of Nations established. The Miseries of Mankind would be diminished by it; and the Happiness of Millions secured and promoted.”